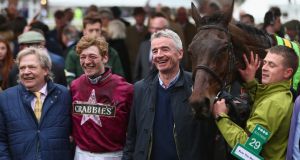 If it’s incongruous for a health company to start sponsoring the world’s most famously fraught steeplechase then just as unlikely is the idea of Mouse Morris at the centre of a PR bash to publicise the Randox Health Grand National at his Fethard stables in Co. Tipperary on Tuesday.

As the son of the former International Olympic Committee president, Lord Killanin, Morris may be bred for schmoozing but is instead famously content to dress down, smoke endless cigarettes, occasionally beat a Bodhran in a Connemara pub, and every so often train a champion racehorse.

That the last of those champions in an acclaimed 35-year training career was the Michael O’Leary-owned Rule The World meant that eight months after winning the world’s most famous race both the horse and a platoon of media types showed up looking for “colour”.

The National’s status as racing’s most demanding test provoked even the famously unsentimental O’Leary to decide Rule The World had earned a happy retirement: if Morris looked admiringly at his old hero back home the sight of some of the rest of us provoked some very colourful language indeed.

It is tribute to the 65-year-old’s huge popularity that even those who didn’t know him at all immediately recognised its playful nature.

Something about the impish grin, wild hair and blatant disregard for attention has long since seen Morris clasped resolutely to National Hunt racing’s bosom. And there has always been an alert intelligence to go with the instinctive ability to mould the careers of good horses. It’s why some of the on-the-record colour was very impressive indeed.

For the moment though it was as fresh as the frost around Morris’s home ground where he handled all media with an ease and aplomb that testifies to how he has learned in the harshest possible way how trivial such tiresome duties really are.

Less than a year after his beloved 30-year-old son “Tiffer” died due to carbon monoxide poisoning while on holiday in Argentina, within a dozen days last spring, Morris won both the Aintree National with Rule The World and the Irish National with Rogue Angel.

If the fates seemed skewed then the maelstrom of emotions for a heartbroken parent must have been overwhelming. Pain still lurks not too far from the surface but ironically it might actually be eased a little sometimes by exposure to other media types. Morris has become an advocate for the installation of carbon monoxide alarms in homes.

“I couldn’t do enough for it. It is frightening how many near-misses people have. They think they have flu, or nausea but they don’t know,” he says. “People should have alarms and if they go and do that then maybe some good will have come from a bad day.”

With no wish to extend his 45-box capacity – “I’m not a big numbers man, and I’m too old to be building!” – and faith in taking a long-term view with his horses, Morris can seem “old-school” to some although he isn’t one to hark back with nostalgia to the National’s glory days with Red Rum in the 1970s.

Then he rode in a handful of Nationals when the fences were like brick walls compared to today’s adapted obstacles. He remembers falling at The Chair once – and remounting.

“They’ve done a great job at Aintree. There’s been compromise and everyone’s happy. Before it was like a day’s hunting, and of course there was fear when you were riding; but it was a different fear, an excited fear. Now you need a good horse just to get into the race. Rogue Angel stays and jumps: whether he’s got the class we’ll have to wait and see,” he says.

What still amazes him after Rule The World’s victory last April is the continuing global response.

“There are 600 million worldwide who watch the National: only 60 million watched Trump!” laughs the man who a decade ago won the Cheltenham Gold Cup with War Of Attrition. “That was completely different. Everyone knows the Grand National, even though the Gold Cup is the race you’d probably prefer to win.”

If that one produced a PR wince, it also reassured that Mouse remains very much Mouse.

1 Gerry Thornley: After 32 weeks the Six Nations is back up for grabs
2 Extremes of sweet and sour for Solskjaer as Man United show signs of revival
3 Arsène Wenger: Arsenal was a matter of life and death to me
4 Bennett girding his loins for impossibly unpredictable Vuelta
5 Stockdale and Ringrose on board with expansive Irish game plan
Real news has value SUBSCRIBE