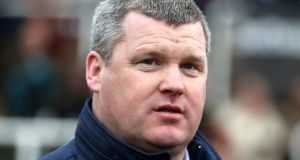 Minister for Agriculture Charlie McConalogue should come before TDs and Senators to face questions on the “substantial” State funding to the horse racing industry and how it needs to be linked to animal welfare standards, Sinn Féin TD Matt Carthy has said.

Mr Carthy said he would ask the Oireachtas Committee on Agriculture, of which he is a member, to examine the issue in the wake of controversies that have hit the sport in recent days.

Horse trainer Gordon Elliott and jockey Rob James both apologised after images emerged of incidents where they were respectively pictured and filmed sitting on dead horses.

The Irish Horseracing Regulatory Board (IHRB) has launched investigations into both incidents.

Mr Carthy said they were “disgusting images” adding: “I’m sure that view is shared by the vast majority of people in the sector”.

He said the committee should look into State funding of the industry “to ensure that the substantial level of investment by Government in the horse and greyhound sectors is matched by ever-improving animal welfare standards”.

The TD said he would ask for the committee to hold meetings on the issue beginning with an appearance by Mr McConalogue and Department of Agriculture officials. He suggested that Horse Racing Ireland (HRI) and the IHRB could also be invited to appear before the committee.

The Cavan-Monaghan TD said the “highest animal welfare standards” must be in place and those standards need to be “continually monitored and enforced so we can be absolutely assured that the levels of taxpayer funding that goes into these sectors is being well spent”. HRI is set to receive about €76.8 million in State funding in 2021 from the Department of Agriculture through the Horse and Greyhound Racing Fund.

A HRI spokeswoman said the organisation is “always happy to meet with the Oireachtas agriculture committee to discuss our industry, and would welcome the opportunity of a meeting to discuss animal welfare standards throughout the racing and breeding sector”.

Mr McConalogue outlined plans to fund the horse and greyhound industries during an appearance at the committee last November. He told TDs and Senators at the time: “The welfare of horses and greyhounds is a cornerstone of both industries and I am assured that HRI and RCÉ [Rásaíocht Con Éireann] are striving to ensure the highest standards for the sport and its participants, on and away from the racecourse.”

On Monday Mr McConalogue responded to the picture of Mr Elliott saying: “The photograph is not reflective of the highest animal welfare standards we demand for the sector, nor does it reflect the tremendous care horses receive in Ireland. It is not the kind of image we want associated with horse racing in Ireland.”

He said he supported the IHRB’s investigation and declined to comment further.

A department spokeswoman said on Tuesday that State funding of the thoroughbred horseracing industry “ensures that the sector achieves its maximum potential and underpins the industry contribution to economic, social and cultural development.”

She said: “The welfare of thoroughbred horses is a cornerstone of the industry, and the Department of Agriculture, Food and the Marine is assured that Horse Racing Ireland strives to ensure the highest standards for the sport and its participants, on and away from the racecourse.”