Many Clouds primed for bid to retain Grand National crown 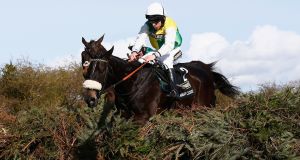 Many Clouds and Leighton Aspell on the way to winning the 2015 Crabbie’s Grand National at Aintree. Photograph: Clive Rose/Getty Images

Last year’s winner Many Clouds features among 126 entries for the Grand National on April 9th, with the Aintree feature attracting the highest number of entries since 2008.

Oliver Sherwood’s stable star will be attempting to emulate Red Rum, who was the last horse to win back-to-back Nationals in 1973-74. Dr Richard Newland’s 2014 winner Pineau De Re, who became the first horse since 2002 hero Bindaree to win another contest after taking the famous race when scoring over hurdles recently, is also on the list. Double Seven was sent off favourite for the National in 2014 and eventually finished third, but he subsequently missed the entire 2014-15 season. Martin Brassil’s charge returned to action at Punchestown on New Year’s Eve and has since run again over hurdles at that track last month.

1 Morning Assembly (Pat Fahy, 40-1, best price): A top-class novice hurdler and chaser, he was off for almost two years before returning to action with a pleasing display when just touched off at Fairyhouse. Whether that showed all his old ability remained is open to debate, but it at least showed he still has an appetite for the job and on his old form he could be very well treated.

2 Many Clouds (Oliver Sherwood, 12-1): It may seem a bit of cop out suggesting last year’s winner and the ante-post favourite as a ‘value’ selection but he is still available at a double-figure price and he showed at the weekend he is every bit as good as ever when beating all bar Smad Place. His previous run behind Don Poli was also meritorious at the weights and there is no chance he will be his current price on the day.

3 Shutthefrontdoor (Jonjo O’Neill, 25-1): Might be remembered as the horse who failed to give Tony McCoy a fairytale send off last year, but he did everything right for three-quarters of the race. He simply failed to see out the trip, but with another year on his back O’Neill is confident he can get him to stay further as he believes he was too keen in the early stages. Reports are he is more grown up this year and he should not be too far away.

4 The Last Samuri (Kim Bailey, 33-1): Kim Bailey knows exactly what it takes to win a National, having done so with Mr Frisk, and his resurgence in recent years has been good to see. The Last Samuri, formerly with Donald McCain, threw his hat into the National picture with a gutsy win at Kempton over Christmas, a track which would not have played to his strengths. The doubt would be whether this comes a year too soon.

5 Ziga Boy (Alan King, 33-1): Since the modifications to the fences those who have raced prominently at Aintree have held sway and Ziga Boy’s front-running, bold-jumping tactics would seem ideally suited. He bounced back from a spell in the wilderness to win twice at Doncaster on decent ground and he would get into the race off a lovely racing weight. If he runs there is little chance the 33-1 available now will be on offer.