ITV may look to Jeremy Kyle to front racing coverage 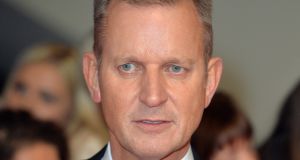 Jeremy Kyle is being discussed by ITV as a possible presenter of its racing coverage. Photograph: Anthony Harvey/Getty Images

Jeremy Kyle is believed to be one of the frontrunners to present ITV’s racing coverage from next year.

ITV is keen to distance itself from any speculation concerning the new role, with a shortlist of candidates unlikely to be established until the summer at the earliest, but Kyle has been described by a source close to the television presenter as “an interesting choice”.

Kyle, 50, has had strong links with ITV since the Jeremy Kyle Show was first aired in 2005.

He is also a renowned fan of the sport, having featured on Racing UK during all four days of last year’s Cheltenham Festival, and partly owns several horses.

Two of those, the Paul Nicholls-trained duo of Old Guard and Dormello Mo, could both feature at Cheltenham in March.

“His name has been discussed, we are not denying that,” a source close to Kyle said.

“He would be an interesting choice and, at this stage, all options are being opened.

“People are talking about him and it would be exciting for the racing community as he has a love and passion for the sport.

“It’s early days, but his name has been discussed.”

At The Races presenter Matt Chapman and Racing UK’s Oli Bell are also thought to be on ITV’s radar for the high-profile role.

An ITV insider said there has been “multiple expressions of interest” regarding the job, but that recent speculation about Kyle came from sources outside of the network.

ITV has signed a four-year deal and will show a minimum of 34 days of racing a year on the main channel, with another 60 to be broadcast on ITV 4, once a 31-year association with Channel 4 ends next January.