Hurricane Fly is crowned Horse of the Year again 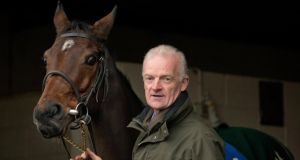 The dual Champion Hurdle winner Hurricane Fly is now a dual Horse of the Year too after being crowned Irish racing’s outstanding performer for 2013 at an awards ceremony at Leopardstown yesterday, the likely scene of his next start at the track’s Christmas festival which starts in just over a fortnight.

A possible clash between the Willie Mullins-trained superstar and young pretenders such as Our Conor and Jezki in the €100,000 Ryanair Hurdle will be the likely highlight of the entire festival which is worth over €1.1 million in prize-money.

And it was the issue of prize-money that was at the centre of Joe Keeling’s speech at yesterday’s Horse Racing Ireland Awards as the HRI chairman outlined his priorities for racing’s ruling body in 2014 in front of Minister for Agriculture, Food & Marine, Simon Coveney.

‘Competitive position’
“Prize-money has dropped in Ireland by 26 per cent since 2008 and at the same time it has improved in both France and the UK, so we risk losing our competitive position internationally,” said Keeling. “I will ask the board of HRI to approve an increase in prize-money when it meets on Friday.”

The Horse & Greyhound Fund saw a cut of over half a million euro in the last budget, bringing its funding for 2014 to €53.2 million.

Keeling said yesterday his other priorities for the New Year include reducing costs for owners and racing professionals, as well as bringing racecourse facilities up to the best international standards, especially at the Curragh.

The HRI chairman said he will look for a 10 per cent reduction in levies and charges by HRI and the Turf Club and stressed there must be streamlining of the functions carried out by both bodies, stating: “We must reduce costs to owners trainers and jockeys.” He added: “We must improve facilities, particularly in relation to the Curragh which has to be a fitting venue for top-class international flat racing.”

Need for efficiency
In his own speech Coveney also stressed the need for efficiency between services in HRI and the Turf Club and said he would be meeting with both bodies next week. The Minister also said he expected betting legislation to be finalised early in 2014. On the back of recent official visits to Japan and the Gulf States, Coveney pointed to the reputation of Irish racing as evidence of the good deal he believes the state gets from its investment in the Horse & Greyhound Fund.

“The investment of public money sees a return to the state in many multiples of the figure invested,” said the Minister who added that he wouldn’t be found wanting in terms of increasing government funding to the fund if and when economic conditions improve.

Headline act
Coveney referred to the impact in Japan of the Nakayama Grand Jump success in April of the Willie Mullins-trained Blackstairmountain but it is Hurricane Fly who remains the Mullins headline act after securing a second Champion Hurdle victory at Cheltenham in March. He also recorded a world-record 17th Grade One success in last month’s Morgiana on his return to action.

That was enough for the son of Montjeu, Horse of the Year in 2011, to land the award for a second time, the first occasion in the 11-year history of the prizes that one horse has landed the top award on two occasions.

Mullins won the National Hunt Award after a season which saw him smash the record for winners with 193 victories in Ireland. Aidan O’Brien’s old record tally was 155.

Johnny Murtagh landed the Flat award for the first time after a season in which he combined training with a riding career that saw him in prolific Group One-winning form.

Jockey Barry Cash won the Outstanding Achievement award while the Contribution to the Industry award went to legendary trainer and breeder Jim Bolger.

Holder shines with the ball as West Indies take control against England 19:23
Club rugby to start back from September 12th on regional basis 18:32
Katie Taylor out to banish all doubts in rematch with Delfine Persoon 17:56
Trick or treat: Ireland set for Halloween showdown with France in Paris 17:29
Tiger Woods to make PGA Tour return at Memorial Tournament 16:10
Here is your handy guide to sport on television this week