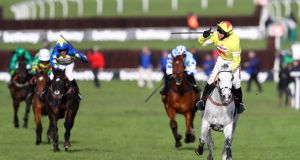 Harry Skelton hopes Politologue can pick up where he left off by making a triumphant return to action against Altior in the Betfair Tingle Creek Chase – for which eight have stood their ground.

Having steered the Paul Nicholls-trained grey to glory in the Queen Mother Champion Chase in March, Skelton will bid to secure a second Grade One victory aboard him at Sandown on Saturday.

Skelton has not sat on Politologue in public since their Festival triumph, but he has ridden him on Nicholls’ gallops at Ditcheat in preparation for his return.

Skelton said: “I’ve had a sit on him, and he feels in great form.

“Paul is very happy with him, and that is the main thing. If he is happy then I’m happy.

“He does feel very well, and we are looking forward to it.”

Although the John Hales-owned nine-year-old failed to feature in the race 12 months ago, having previously landed the 2017 renewal, Skelton is far from concerned – given he has already won first time out on three occasions.

He added: “He blew out there a little bit last year, but I think Paul is much happier with him this time round.

“The defeat in last year’s race doesn’t play on my mind, because he feels great to me – and we know he goes well fresh.”

This year’s Queen Mother lost some of its gloss following the late withdrawals of Altior and Chacun Pour Soi, but Skelton believes their absence should not detract from the performance Politologue put up.

He added: “Cheltenham was fantastic, and it doesn’t say that the race cut up on the trophy.

“He gave me a day I will never forget, and I’m now just really looking forward to getting back on him.”

Politologue has yet to defeat Altior in their three previous clashes.

But Skelton is not afraid of renewing battle with Nicky Henderson’s brilliant dual champion, who has tasted defeat just once in 21 jump starts.

He added: “We are taking on Altior – but when you are running in Grade One races you expect hot competition.

“It’s going to be a good race, and hopefully all the key players turn up.”

Altior, winner of the race in 2018, will be bidding for an 11th Grade One win for Nicky Henderson and recently took part in a racecourse gallop at Newbury with champion hurdler Epatante.

Harry Whittington’s Rouge Vif, third in the Arkle in March, faces a step up in class, having bolted up under a big weight in a handicap on his reappearance.

Kim Bailey has left his prolific winner First Flow in – while Castlegrace Paddy, who beat A Plus Tard in the Fortria Chase, could come over from Ireland.

Brewin’upastorm and Esprit Du Large complete the eight. But neither last year’s winner Defi Du Seuil, who disappointed badly in the Shloer Chase, or last year’s third Waiting Patiently were left in at the confirmation stage.