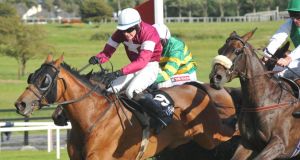 The Friday evening session at Ballybrit is traditionally the preferred option for local racegoers as they finally get to let their hair down at the end of the working week.

It can’t be easy chained to the desk when just about everyone else is heading to the ATM looking for betting money.

But those who finally made it to Ballybrit yesterday evening could enjoy that Friday feeling knowing they were in very safe hands. Doctors and nurses were two a penny in the enclosures as Croí, the west of Ireland cardiology and stroke foundation, hosted its annual race day for 440 supporters in the executive suite on the top floor of the Killanin stand.

The late Lord Killanin was the first chairman of Croí and was also chairman of the Galway race committee.

A valuable money-spinner for the charity, the €125-a-head – or €1,200 for a table of 10 – VIP race-day package included a private coach to the racecourse, admission and race card, drinks reception, four- course meal with wine, live entertainment and, of course, that all-important coach back to the city centre at the end of the night. The event sold out three weeks ago and Croí had to operate a standby list for latecomers.

“It’s the first time in five or six years – probably since the crash – that we have sold out this far in advance. We have had to ride out the storm in the intervening time but we’re back with a bang this year, thankfully,” said chief executive Neil Johnson.

Over at the first-aid centre it was blisters all the way. “We’ve had lots of them, with many people wearing unsuitable shoes,” said the helpful woman at the door.

No heart attacks? She couldn’t divulge that kind of information but it appeared that there was no need for a rush to access the expertise on the top floor of the Killanin stand.

On the track, the heart-stopping excitement continued for the punters as the well-fancied Clondaw Warrior trained by Willie Mullins captured the featured €100,000 Guinness Handicap for the Act D Wagg Syndicate which includes the wives of jockeys Ruby Walsh and David Casey.

The lucky punters who backed the 4/1 shot could be forgiven for tweeting their good news on social media. They were greeted by tweets of a different kind, however, at the payout windows of the tote building closest to the parade ring.

A family of sparrows has taken up residence in a corner of the roof overhead and two very young chicks were singing away, oblivious to the goings- on below. A press photographer, who ought to stick to the lens work, insisted on calling them Cher and Gar.

“The mother has been flying in and out feeding them all week – it’s lovely,” said the friendly tote woman.

Not so lovely, one imagines, for those who were unlucky enough to notice and queued at the window immediately underneath.