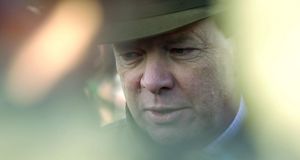 Leading racehorse trainer Edward O’Grady led tributes to his late wife Maria at her funeral Mass when hundreds gathered to mourn the popular television producer, sportswoman, and mother who died in a hunting accident last Saturday.

The equine world was well represented at the Church of St Joseph the Worker in Moyglass, Co Tipperary, just kilometres from the O’Grady training base in Killeens, Ballynonty.

Edward O’Grady, fighting back tears, thanked all of the friends, neighbours and colleagues who travelled to pay their respects, as well as members of the Tipperary Hunt who were present when the tragedy unfolded last Saturday.

He thanked those at the scene who tried to help and who offered solace to the couple’s daughters, and the ambulance crew who attended and “who tried to do the impossible, but sadly it just couldn’t be done”.

He read a tribute from Maria’s friend, London-based actress Dillie Keane who couldn’t make it to the funeral because of on-stage commitments and described his wife as “beautiful, spirited and bright”, as well as “feisty, also warm, fiercely loyal and very brave”.

“Maria, I will miss you dreadfully,” Keane said. “I’ve always thought you were a star Maria, true supernova, but I think I might have got it wrong. You are a comet, a great, dizzying, brilliant and bright comet, who lit up the sky.”

Edward O’Grady recalled the day they married, 18 years ago in Clonmel, and said the intervening time had given them two marvellous, wonderful daughters.

“I would like to thank Maria for 18 glorious years, the happiest of my life,” he said.

“Goodbye my darling, thank you for everything,” he added, before telling mourners he had decided to wear the same suit for the funeral as he had for the couple’s wedding.

Family friend David Williams said Maria and Edward met when he retrieved a hat which had got caught in the bough of a tree while she was out hunting. “Edward and Maria had an 18 year honeymoon — every morning, a kiss started the day and every night a kiss ended the day, without exception.”

Guards of honour were provided by children from Moyglass National School, and choral music by pupils of the Ursuline Convent in Thurles, with members of the Tipperary Hunt Pony Club and Tipperary Foxhounds also paying their respects.

Symbols of Maria O’Grady’s life which were brought to the altar at the beginning of Mass by her children included flowers, a riding hat and a family photograph.

Parish priest Fr Jimmy O’Donnell said it was a day of sadness and reflected on the shock and disbelief felt throughout the community and beyond last Saturday when news came through of the tragedy.

“Maria died doing what she loved on Saturday, in a sport that she lived for.”