Found loses the edge at Curragh as Iveagh Gardens grows

After disappointing result, trainer Aidan O’Brien looking ahead to Derby warm-ups at Chester and Lingfield 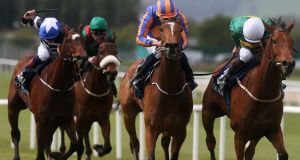 in winter National Hunt conditions and which saw a JP McManus-owned winner of the Group Three feature.

Classic considerations don’t figure on the four-year-old Iveagh Gardens’ radar, but she continued the run of long-priced Group Three winners at HQ this year when surprising the Moore-ridden favourite Found by a couple of lengths at 25-1 in the Canford Cliffs Athasi Stakes.

Considering the winner was rated over a stone and a half inferior to Found beforehand, the result hardly boosted Found’s reputation which was enough to have made her favourite throughout the winter for the Newmarket Guineas.

So on the face of it, this reintroduction hardly had Aidan O’Brien pondering whether he made the right call by taking Found out of Newmarket at declaration time. But neither did the champion trainer give the impression of having lost any faith in his juvenile champion’s potential to join Saturday’s Newmarket hero Gleneagles as a classic winner.

Iveagh Gardens’ trainer Charles O’Brien was understandably even happier: “Not many handle the ground when it gets like that but she doesn’t just handle it, she enjoys it. ”

Aidan O’Brien’s immediate priority this week will be Derby warm-ups at Chester and Lingfield before Highland Reel takes his chance in this Sunday’s French 2,000 Guineas, the Poule D’Essai Des Poulains, at Longchamp.

“The plan is for Highland Reel to run there and War Envoy might go with him. But it looks like we won’t have a runner in the fillies’ race in France,” said O’Brien, who confirmed the highly-touted Giovanni Canaletto will miss this Thursday’s Chester Vase due to a bad scope.

“Smugglers Cove will go for the Dee Stakes, we’ll run something in the Vase, and Sir Isaac Newton will run in something at Chester too. Order Of St George could go to Lingfield for the Derby Trial there,” he added.

This Sunday’s Derrinstown at Leopardstown is traditionally Ireland’s premier Derby trial and York’s upcoming Dante is its equivalent in Britain. Saturday’s Guineas flop Ol’ Man River could attempt to retrieve his reputation on the Knavesmire and John F Kennedy is on a similar retrieval mission in the Derrinstown after coming last of three in last months Ballysax Stakes.

“He needs to go to Leopardstown. Hopefully it will be nice ground there,” said O’Brien.

Dermot Weld’s big Derby hope Zawraq is also in contention to line up in the Derrinstown which is sponsored by his owner, Sheikh Hamdan.