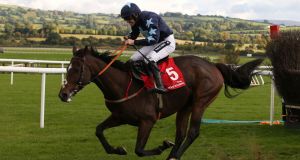 Three Stars ridden by Ruby Walsh races clear of the last on the way to winning the Buck House Novice Steeplechase at Punchestown. Photograph: Brian Lawless/PA

Three Stars produced an impressive display in the hands of Ruby Walsh to run out an authoritative winner of the Buck House Novice Chase at Punchestown.

Trainer Henry de Bromhead won successive renewals of this Grade Three prize with the legendary Sizing Europe (2009) and the talented Loosen My Load (2010) and Three Stars was 3-1 to follow suit after leaving a disappointing chasing debut at Tramore behind with victory at Listowel last month.

The six-year-old jumped neatly throughout the two-and-a-quarter-mile contest and moved strongly to the lead rounding the home turn.

De Bromhead’s charge safely negotiated the remaining two fences and was well on top as he passed the post two and a quarter lengths to the good.

Ball D’Arc, runner-up to Three Stars at Listowel before unseating his rider at Fairyhouse last Saturday, came through to finish second again.

Referring to Walsh, De Bromhead said: “You forget how good that man is when you haven’t used him for a while! He’s just brilliant and gave him a serious ride but still came in and was critical saying he had committed too early.

“I’m delighted with that and I’m really happy for Robert and Julie [Finnegan, owners]. He’s a really exciting horse.

“He was a 140-rated hurdler and has got a gear. We’ll stick to that kind of trip. I was delighted to see him get the two-mile-two as I wasn’t convinced he would.

“He’s got options now with either the Craddockstown back here or the race in Cheltenham the week before.”

Walsh added: “He jumped spectacular. I was kind of thinking if I could get to the back of the second-last on the bridle, I had a turn of foot that could accelerate to win the race and that’s the way it worked out.

“It’s beautiful ground, he really liked it, but he jumped brilliant for a novice.”

Sadler’s Risk got the better of a protracted duel with Lord Scoundrel to claim top honours in the Irish Daily Star Chase.

This time around the Cullentra handler fielded Galway Plate hero Lord Scoundrel, who was the 11-8 favourite to get back on the winning trail having come to grief at the second-last in the Kerry National at Listowel last month.

Ruby Walsh sent the seven-year-old straight to the lead from the off, with the De Bromhead-trained 7-4 chance Sadler’s Risk his closest pursuer from flag-fall.

The pair raced clear of the field throughout and Sadler’s Risk and David Mullins hit the front before the home turn.

To his credit, Lord Scoundrel battled back between the final two fences, but De Bromhead’s charge winged the last to seal a five-and-a-half-length success to help the Knockeen-based trainer complete a bir race double.

“I’m delighted with that. He did it really nicely and it was a super ride from David,” said De Bromhead.“He was in right at the weights and the handicapper got it spot-on.

“He’ll probably go for the James Nicholson (JNwine.com Champion Chase) now and we’ll see how he gets on in that.

“He jumped really well. I thought he got close to a couple but that’s his style. He picked up when he asked him to and he’s got a lot of class.

“That was his first test today and now we’ll try him in the north [Down Royal].

“He probably won’t run on winter ground but I’ll have to speak to Roger [Brookhouse, owner].”

Mullins said: “He was a great ride the whole way. He did everything right and conserved everything he could.

“He really quickened up over the last two and met them spot-on. He’s in great form and credit to Henry.”