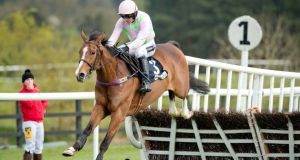 Ruby Walsh on board Faugheen comes home to win the Champion Hurdle on Day Four of the Punchestown Festival. Photograph: Morgan Treacy/Inpho.

There was a remorseless quality to the 1 to 6 favourite’s €200,000 Queally Group Champion Hurdle victory which turned Faugheen’s sole start in Ireland this season into a glorified front-running lap of honour.

He beat his stable companion Arctic Fire by eight lengths, six and a half lengths more than he did in the Champion Hurdle at Cheltenham in March, and managed it while giving the impression he was far from the limits of his ability.

Maybe because his three previous starts this season had been in Britain, Faugheen hadn’t quite captured the imagination of the Irish racing public before but Ruby Walsh steered the horse back to a huge Ladies’ Day festival reception and even tighter 5 to 4 odds about him successfully defending his Cheltenham crown next year.

Faugheen’s veteran stable companion Hurricane Fly almost had his best days behind him before being fully embraced by the public in a manner that another legendary hurdling champion Istabraq, in contrast, enjoyed almost immediately.

But wherever he rates in the sentiment stakes, it’s becoming apparent that in Faugheen we could be dealing with a rare and singular talent worthy of comparison to any hurdler ever.

“He’s just an aeroplane,” enthused Walsh, on the verge of a record-equalling 10th Irish jockeys title. “He has everything: speed, stamina, goes on any ground and over any trip.

“Hurricane Fly in his heyday was brilliant and this fellah is the same in his era, just as Istabraq was. Handicappers try to compare them, but you can’t. Arctic Fire is a very good yardstick but this fellah had his ears pricked halfway after the last.”

Walsh is famously cold-eyed in his assessments but even in the midst of another hat-trick on the day and took his prize money tally in Ireland this season past €4 million, Mullins appeared determined not to get carried away with Faugheen’s performance.

“He has done it in year one and now we’ll have to see,” the champion trainer said. “I believe in Faugheen, but he has to do it and stand the test of time. That’s probably what we need to see now. He was very, very good today. Arctic Fire was never on the bridle which shows the pace he’s able to go which for a former point to pointer is extraordinary.”

However, having described his outstanding novice Douvan as “good as we’ve ever had,” Mullins pointedly refused to get similarly effusive about his senior star, wondering instead, unlike his jockey, what the handicapper might make of Faugheen’s performance compared to Hurricane Fly’s pomp.

By necessity senior handicapper Noel O’Brien casts the flintiest eye of all on form and maintains he will not budge Faugheen from his current 173 mark, despite the latest stunning visual impression the horse has made.

“I can’t move him because of the proximity of Dall Arca in third,” explained O’Brien. Istabraq reached a career peak of 176, and Hurricane Fly peaked on 175, but significantly O’Brien quickly added: “Without doubt I would put a ‘P’ next to Faugheen in terms of potential to improve further. He was hugely impressive there.”

Maybe Mullins’s unwillingness to join in the general gushing over such an exciting new champion is due to having a stable full of talent at his disposal and the very next race after Faugheen’s saw Nichols Canyon put himself into next year’s Champion Hurdle picture too.

He too made all the running to secure a fourth Grade One this season and his trainer said: “Four Grade One’s is a fair feat and I thought that was a fantastic performance. I think it puts him in the Champion Hurdle picture. He’s only a novice still: mind you he only has to improve 20lb to get to Faugheen.”

Blood Cotil had secured Mullins another six-figure pot in the novice handicap chase when winning under Paul Townend.

Mark Walsh got a one-day ban, his second of the festival, for his use of the whip on the novice hurdle winner Snake Eyes whose owner JP McManus also landed the concluding hunters chase with the outstanding In the Fringe.