Faugheen crowned champion as Mullins sweeps the boards at Cheltenham 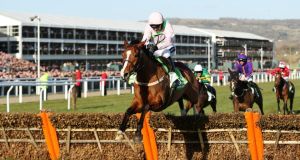 It is Faugheen’s happy fate to be forever the centrepiece of his trainer’s epic 2015 opening day festival four-timer but time may well record how it was also the new Stan James Champion Hurdle winner taking the first steps towards singular status.

Certainly the inevitable result in the midst of a widespread struggle to comprehend the scale of Willie Mullins’s overall achievement was an immediate tendency to place hurdling’s new champion in the context of the remarkable run of Grade 1 victories.

But whatever heights Douvan and Un De Sceaux may achieve in the future they will struggle to top the impression Faugheen made in preserving his unbeaten record and in doing so managing to indicate that even better may be about to come.

There is something freakish about this unfashionably bred ex-point-to-pointer winner who is possessed of the sort of natural speed to leave even a great champion like Hurricane Fly gasping and a galloping style that makes even regular jumping errors seem irrelevant.

He made a couple during his greatest career test to date, looking awkward at the third last, and even more so at the second last. But they made no difference. Successfully making all in the Champion Hurdle is rare. Faugheen was a target for other top hurdlers including the 2014 champion Jezki and his legendary stable companion Hurricane Fly, the winner in 2011 and 2013.

But despite keeping tabs on the 4-5 favourite throughout, by the turn in both Jezki and the top British hope The New One were being burned off as Faugheen moved effortlessly clear.

His stable companions Arctic Fire and Hurricane Fly moved through to fill the places and Arctic Fire closed the gap to a length and a half at the line. But at no stage did Faugheen and Ruby Walsh look to be in anything but complete control.

Mullins said Walsh’s plan to make all the running was a month old – “He told me what he was going to do, how he was going to do it, and he did it. In championship races it’s always hard to get to a front-runner and if you are brave enough to do it, why not? I thought he was in control all the time.”

That Walsh only confirmed he would ride Faugheen instead of Hurricane Fly a few days ago couldn’t dispel the widespread belief that his decision was inevitable, quite a tribute to the younger horse considering ‘The Fly’s’ genuinely legendary status.

“It was still a big call to get off him (Hurricane Fly) but this is an incredible horse and this is probably the best feel I’ve ever had from him. It was certainly his biggest challenge,” Walsh said.

The fact that Faugheen rose to that challenge while still giving the impression the bottom of his potential has yet to be reached could yet be the greatest overall legacy of the opening day of this festival.

Among those watching him was Ireland’s senior National Hunt handicapper, Noel O’Brien, a man instinctively inclined to a cool detachment of form, and whose initial reaction in those bare form terms was to rate Faugheen’s performance in the mid-170’s.

The context of that is Hurricane Fly’s career peak rating of 175. Istabraq’s peak figure was 176. This is the best possible company ever and yet O’Brien added: “I think any figure in the mid-170’s we come up with, you could put a plus next to it in terms of likely further improvement on it. He’s some horse. And the funny thing is he makes a mistake in most of his races and it seems to make no difference to him. He just keeps galloping.”

The best opposition around found that out to their cost when it counted most and even a first impression that they didn’t help themselves by giving Walsh an uncontested lead doesn’t seem to add up.

“AP (McCoy) blamed himself for taking on the winner,” said Jezki’s trainer Jessica Harrington. “He thinks it cost him second or third. He got to the winner’s quarters and then he (Faugheen) just took off.”

It’s little wonder then Faugheen is just 6-4 with some bookmakers to successfully defend his title in 2016. Normally such offers are the confetti thrown on the present. This time they merely looked prescient.