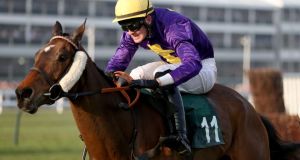 Up to eight hopefuls look set to try to become the 17th Irish-trained winner of the Crabbies Aintree Grand National since 1900 this Saturday but Jim Culloty is hoping to join an even more exclusive club.

In the same timeframe just five men have both ridden and trained a Grand National winner and Co Cork-based Culloty has two shots at joining them.

The 2014 Cheltenham Gold Cup hero Lord Windermere tops the weights for Saturday’s race but bookmakers reckon his other contender Spring Heeled is a bigger threat and make him a general 20-1 shot.

Among the Irish team only Gordon Elliott’s Cause Of Causes at 16-1 is shorter in the betting, which is dominated by another JP McManus-owned horse, Shutthefrontdoor, bidding to end Tony McCoy’s career on a spectacular note.

It is 13 years since Bindaree provided Culloty with a memorable Grand National success, adding to a big race CV that also included three Gold Cups on Best Mate. Lord Winderemere’s blue-riband victory in 2014 made Culloty just the fourth man to train and ride a Gold Cup winner.

Englishman Nick Scholfield, who has been booked to ride Spring Heeled, said: “He goes there with an outstanding chance and he has under 11st in the weights so he ticks all the right boxes.”

Lord Windermere’s presence at the top of the handicap ensures Spring Heeled stays on 10.12. The former Gold Cup winner will be ridden by Robbie McNamara after Culloty’s high-profile split from Davy Russell who is currently on the injury sidelines.

A maximum field of 40 will line up on Saturday with final declarations on Thursday, which leaves Sandra Hughes hoping for defections to allow Raz De Maree to get in.

Raz De Maree is currently number 43 among the 65 remaining entries but his trainer could hardly be in better form having landed Monday’s Irish Grand National with Thunder And Roses.

“I’m just hoping we get in and if he does, I wouldn’t want the ground to be too good as he’s a soft ground horse,” Hughes said. “If he does run I’ve provisionally booked Johnny Burke to ride him, assuming the horse that beat him at Uttoxeter, Goonyella, doesn’t get a run. He is below us in the list.”

Ruby Walsh and Willie Mullins rely on Ballycasey in the National but their Grade 1 focus prior to that will be on Thursday’s Aintree Hurdle, a race Walsh has won four times but which remains a rare big-race blank for the champion trainer.

Mullins has opted to try to change that solely with Arctic Fire after deciding to keep the legendary Hurricane Fly in reserve for Punchestown later this month.

Arctic Fire is joined in the seven-runner field by Jessica Harrington’s former Champion Hurdle winner Jezki while the top home hope appears to be another former champion, Rock On Ruby.