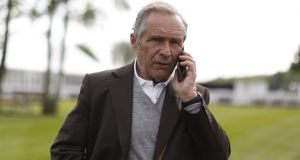 Prodigious analysis of what is widely regarded as the most open Epsom Derby in years could lead to the conclusion that nothing can win the world’s greatest classic. However, on the basis that something has to, then France’s Cloth Of Stars could be the answer.

If Friday’s Oaks heroine Minding looked outstanding beforehand – and much more so afterwards when thoughts inevitably turned to what she might have done against the colts – a lot will fancy their chances in this Derby, none more so than Sheikh Mohammed’s Godolphin team.

They paid a near €100,000 supplementary fee to get Cloth Of Stars into the richest race ever run in Britain. Their horse is trained by a master in André Fabre who five years ago combined with jockey Mickael Barzalona to win with Pour Moi.

Cloth Of Stars himself boasts a Derby pedigree in that he is by the peerless 2009 Epsom hero, Sea The Stars, and the last of his six career starts produced an impressive win in one of the traditional trials, over a proven Group 1 winner to boot.

He has also, however, shown signs of temperament which could see Epsom’s famously sulphuric atmosphere boil his brains to the extent his chance will be gone before the gates are due to open at 4.30 on Saturday.

Success for any of those will see O’Brien emulate the iconic tally of six Derby winners his Ballydoyle predecessor, Vincent O’Brien, which were notched up between 1962 and 1982.

It would be a remarkable achievement for O’Brien, 15 years after Galileo secured him a first Derby victory. Galileo is the sire of four of the five Ballydoyle hopes, including US Army Ranger who will have Minding’s jockey Ryan Moore on board.

It is often a curio of the “wide open race” that the favourite obliges and while US Army Ranger’s position towards the top of the betting owes more to his connections’ regard rather than concrete achievement, his market rival Wings Of Desire does boast a win in a top trial, the Dante Stakes at York.

He has also had to be supplemented, since up to March he had barely broken out of a canter on the Newmarket gallops. That the top pair in the betting are among the most inexperienced speaks volumes for the uncertain nature of this 237th Epsom Derby.

Dermot Weld’s Harzand, another son of Sea The Stars, is also having just his fourth start and takes his place after a wet week that all but rules out fast conditions but otherwise leaves the ground factor as uncertain as most everything else.

Weld has yet to win the Derby but Moonlight Magic’s trainer Jim Bolger contributed to a haul of 18 Irish-trained winners to date with New Approach in 2008.

Moonlight Magic’s draw in stall one limits jockey Kevin Manning’s options, something which is not an issue for Pat Smullen on Harzand in nine, but the draw could be significant too in that the trio of US Army Ranger, Wings Of Desire and Cloth Of Stars are all drawn wide.

Around Epsom’s helter-skelter course that brings its own problems. But a fast pace on slowish ground could, theoretically at least, favour Cloth Of Stars most.

Another star Ballydoyle filly, Found, will fly the flag in the QE11 Coronation Cup, hoping to recover from a Curragh defeat to Fascinating Rock a fortnight ago. The horse looks to have Postponed to beat.

Limerick set up Waterford final; Cavani completes Man United comeback 07:59
It’s shocking how men have driven women away from exercising in public 06:00
Dogged Armagh fail to stop Dublin claiming place in final 06:00
Ken Early: Maradona’s wonder goal a monument to lost freedom 06:00
‘It wasn’t down to anything dramatic I said . . . It was down to the players’ 06:00