Awesome Annie Power the one to beat in Aintree Hurdle 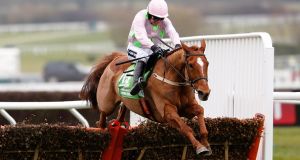 Annie Power is odds on favourite to win the Aintree Hurdle on Thursday. Photograph: Getty

Annie Power is expected to prove a tough nut to crack over what connections believe is her ideal trip as she bids to back up her Champion Hurdle success with victory in the Doom Bar Aintree Hurdle on Thursday.

The Willie Mullins-trained eight-year-old will attempt to land a fifth Grade One success by claiming the two-and-a-half-mile prize on her first start at the track in a race which will see her renewal rivalry with four of those that finished behind her at Cheltenham last month.

While Annie Power will fly the flag for the Closutton handler in a race he has yet to win, Mullins will also be represented by Champion Hurdle third and six-times Grade One scorer Nichols Canyon.

Patrick Mullins, the trainer’s son and assistant, said: “This is the race we think that should be near ideal for Annie Power.

“Like all of those heading to the meeting she has come out of Cheltenham well and she will have no problem stepping back up in trip from two miles.

“If she can run to her Cheltenham form she will be very hard to beat.

“Nichols Canyon slayed Faugheen over two miles and I think going back up to two and a half will help him as he stayed very well on the Flat.

“He won at the meeting over course and distance last year and it would not be the biggest surprise if he turned the tables on Annie Power, however she does deserve to be favourite.”

My Tent Or Yours put in an admirable performance in defeat when chasing home Annie Power at Cheltenham on his first start since April 2014.

With that run showing that all of his ability remains intact, connections of the Nicky Henderson-trained nine-year-old are hoping he can produce a similar performance on his first try over the trip.

“I suppose as he is getting that bit older he is a bit more settled as it was a very good run at Cheltenham and he was just beaten by a good mare.

“He has come out the race great. Nicky (Henderson) is happy with him. It’s a cracking race and we are hoping for another good run.

“We are going into the unknown with him over this trip but it has been a good race over the years for those that have previously run in the Champion Hurdle.

“He does not have many choices apart from Punchestown so this race fits in nicely.”

Sam Twiston-Davies feels 2014 winner The New One, trained by the jockey’s father, Nigel, has it all to do to reverse the form of the three horses that finished in front of him in the Champion Hurdle.

He said: “He’s got an uphill task. It will be very hard to win, but there’s great prize-money all the way down the line. We’ll try to get as much of that as we can.

“He just gives away that quarter of a length every time by not jumping straight.

“In the winter at places like Haydock you can get away with it when he’s not facing the competitors he’s up against at Cheltenham and Aintree. He makes his own life very hard.

“It’s frustrating, but what’s nice is we can stick to two miles, where it’s relatively weak all next season, and then have a go in the World Hurdle next year.”

Completing the six-runner field is the Robert Walford-trained Camping Ground, ninth in the Champion Hurdle, and Court Minstrel from the yard of Evan Williams.