As the jockey had wished, the landmark happened in the colours of Limerick man JP McManus 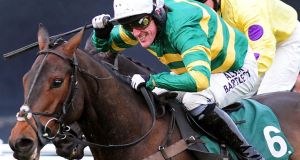 He has broken more bones than records, probably, but Antrim- born jockey AP McCoy tilted the balance further towards the latter yesterday when he rode the 4,000th winner of an extraordinary career.

The latest milestone was passed at Towcester, on a horse called Mountain Tunes. They made an odd couple. Mountain Tunes was a four-year-old, on his race-track debut. McCoy is 39 now, with 18 consecutive seasons as British champion jockey behind him.

Despite being the 6/4 favourite, the Jonjo O’Neill-trained horse looked to have run out of steam towards the end. But then, typically, McCoy went to work on him, coaxing his mount into a late charge. Amid raucous cheering, they were in front by half a length at the line.

As the jockey had wished, the landmark win happened in the colours of Limerick man JP McManus, for whom McCoy is retained rider, and who promptly offered to buy a drink for everyone at the track.

Dedicated victory
But the jockey, who was joined in the celebrations by his wife Chantelle and children Eve and Archie, also dedicated the victory to his agent Dave Roberts, whose father died this week.

Among other things, the Antrim man’s success has long settled any question about who is the real McCoy. One of the secrets of his success may be an unusually high pain threshold, even by standards of jump jockeys.

In his 2011 autobiography, he notes calculations he makes after a serious fall, and before the racecourse doctor arrives: assessing which if any bones are broken, and if he should accept painkillers, only in the context of whether it will cost winners later in the meeting.

His masochism extends even to the recovery process. At a cryotherapy centre some years ago, being treated for broken vertebrae, he wanted to know what the lowest temperature anyone had yet endured there was. Told that a footballer had done -145 degrees, the jockey first equalled the mark, and then surpassed it.

Back at the very start of his career, as a teenager, McCoy was apprenticed to Antrim trainer Billy Rock, who also performed artificial insemination on cattle. Allaying the fears of the jockey’s parents once, Rock told them that, if the racing didn’t work out, their son could always go back to “bulling cows”.

That prospect has receded even further. But, depressingly for his rivals, McCoy at 39 shows no sign even of slowing down. His 3,000th winner came in 2009, so nobody would rule out 5,000 as a possibility. For now, having obliterated every jockey’s record available, McCoy is targeting the 4,182 winners achieved by his former boss, the trainer Martin Pipe.