Ballydoyle handler has won the Doncaster Group One on seven occasions 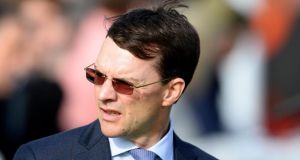 Aidan O’Brien has six of the 13 entries in the Racing Post Trophy at Doncaster on Saturday.

The Ballydoyle handler has won the Doncaster Group One on seven occasions and Aloft, Giovanni Canaletto, Hans Holbein, Jacobean, Order of St George and Royal Navy Ship are all possibles at the six-day stage.

Andrew Balding’s Elm Park heads the opposition following his Royal Lodge success, while Godolphin could be represented by Best Of Times.

Cock Of The North could bid for an amazing double having won the Brocklesby at the track back in March and Sir Mark Prescott has Celestial Path as a possible.

Victorious at Haydock and York, jockey Luke Morris would like to see a few dry days for Celestial Path.

The rider said: “Hopefully if the ground dries up he’ll have a good chance on Saturday.”

Richard Hannon looks likely to win the trainer’s championship in his first full season with a licence and he has Tupi entered for the race, with title rival John Gosden responsible for Sheikh Hamdan Al Maktoum’s Snoano.

William Muir has supplemented Restorer after his fine run in the Autumn Stakes, but connections of Commemorative, winner of that race, decided against doing the same.

The Lambourn trainer said the decision to supplement was quite an easy one to take.

“The owner has had a great season with Stepper Point and this lad won a Bobis race so the money was in the pot,” said Muir.

“He ran a great race at Newmarket and likes cut in the ground so we thought why not.

“At Newmarket I thought the ground might be a bit quick for him, so if that’s the case and he was still able to run so well, I expect him to improve a good bit on softer ground.

“Certainly the way he won at Ffos Las suggested he liked getting his toe in.

“I know they think a lot of the winner (Commemorative) but he needs fast ground.”