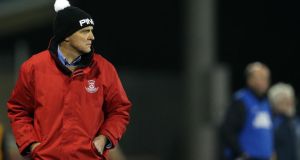 Surgeon Gerry McEntee is very concerned about potential injuries due to players playing too many matches over a short period of time. Photograph: Lorraine O’Sullivan/Inpho.

Six years on it’s the issue that hasn’t gone away. When the GAA’s Burnout Task Force issued its report and recommendations, there was a brief focus on the health and safety issues of over-crowded playing schedules and the pressure being exerted on club schedules by the intensifying demands of intercounty activity.

The serious overload on the Vincent’s players isn’t however a major anomaly but a regular occurrence, as the tectonic plates of the club season shift inexorably towards the autumn.

It wasn’t unusual in the past for the Sundays in between the All-Ireland finals to feature upwards of a dozen county finals but as Ireland international manager Paul Earley said last month when explaining the difficulty of recruiting for the series, “club competitions are being pushed back further and further in the year”.

Unhappiness with this trend has been deepening and was starkly illustrated by the responses to Eugene McGee’s extensive Football Review Committee (FRC) research, which showed nearly two-thirds of respondents (64 per cent) of the view that the club football season was too long and drawn out.

Other grievances are with the lack of a clearly scheduled season with a programme of dependable fixtures and these are expected to be dealt with in the FRC’s imminent report on methods of streamlining intercounty competitions but there is now emerging evidence that the GAA is once more becoming concerned about the welfare implications of the fixtures chaos.

Eminent surgeon
Gerry McEntee, an eminent surgeon and Meath All-Ireland winner, made a significant presentation to the Burnout Task Force in 2007 drawing attention to the increase in surgical intervention for chronic groin injuries – in his view an “undoubted” consequence of over-use of players.

Speaking to The Irish Times this week, he says of the type of crash-bang scheduling that has become commonplace: “You’re more likely to pick up an injury and apart from fatigue, there’s the danger of muscle tear, groin strain and that whole spectrum. Reports from the Dublin replay said that the players were dead on their feet and in four days’ time Vincent’s have to go out again. Of course they’re more at risk of injury.

“The intensity of matches is what everyone tries to replicate in training but it’s very hard to do. There’s no comparison between level of intensity and the level you can reach at club training. Playing these matches over a short space of time means that the injury risks go up.”

Included in this category is Donegal’s 2012 Player of the Year Karl Lacey, whose hectic club schedule after the county’s All-Ireland success triggered the injury that wrecked his season this year.

The county is in the news for having suspended all senior and intermediate championship matches until Donegal conclude next year’s All-Ireland campaign. The decision was opposed at the time by Austin O’Kennedy, the doctor attached to Lacey’s club Four Masters.

The Folly
Just after Donegal’s annihilation by Mayo in the All-Ireland quarter-final, O’Kennedy tweeted: “So the folly of playing club championship in 3 weeks last yr has come back to haunt Donegal One yr later and Karl Lacey has not recoverd.”

At the time, Croke Park explained that there was nothing that could be done about the Donegal decision, as local fixture making is the responsibility of individual county committees.

It has emerged in the past 24 hours that Donegal officers have been asked to come to the GAA’s Management Committee to account for the decision. This has happened not because of any breach of rule but on the grounds of player welfare and takes place on foot of concerns expressed about the situation by the association’s Medical, Scientific and Welfare Committee (MSWC).

The tension between club and county perspectives is clear. Although 98 per cent of players take part at club level, the GAA’s revenues come overwhelmingly from the county competitions.

In other words, according to Dessie Farrell, who sits on the MSWC as CEO of the Gaelic Players Association, the representative body for county players, there is no easy way to force counties to balance the needs of club and county.

“Absolutely. In a county which is starved of success it’s going to be difficult to impose stringent protocols because success is so important in promoting the game to children and even for the morale of the county.”

It’s becoming increasingly clear that this issue has to be addressed – whatever the obstacles – by the GAA at national level.

Richie Power: ‘To me, Kilkenny’s problem is at the roots’

Golf clubs focus on retaining members and capitalising on 2020 boom 06:30
Golf club membership in Ireland: What deals are clubs offering? 06:30
Ireland’s lost golf courses: What happens when the gates close? 06:30
Teaching was Jerry Kiernan’s vocation; in 30 years he never missed a day 06:00
Gary Neville has perfected the chipper Manc with Liverpool chip on his shoulder 06:00