Pat Hickey should be allowed to return to Ireland, Mulvey says 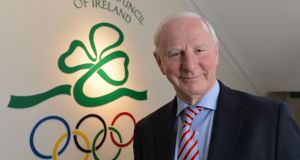 The Olympic Council of Ireland (OCI) president, who has temporarily stepped down from the position pending the outcome of multiple criminal charges, has been in Brazil since August, following his arrest in relation to allegations of organised ticket-touting for the Rio Games.

Speaking at the launch of Sport Ireland’s Irish Sports Monitor report for 2015, Mr Mulvey also defended a phone call from Mr Hickey (71) to members of the OCI board prior to an OCI executive committee meeting last month, which had prompted a walkout by some board members.

“I don’t want to get involved in it but I don’t see anything necessarily wrong with that . . . Ringing back into a meeting to discuss the situation, to me there’s no big deal regarding that,” he said.

In the wake of an Irish Times report that Mr Hickey’s lawyers have asked Brazilian authorities to return their client’s passport, Mr Mulvey said such a concession would be welcome, given Mr Hickey’s fragile health.

“On a more humanitarian level, I would prefer if Pat Hickey was in a position to return home.

“I would appeal to the Brazilian authorities to consider that in the context of his age and his medical condition.

“I think it’s about time now that there should be a reconsideration of his position, and that he at least be allowed to return home pending whatever trial may emerge, if one emerges.

“Just strictly on a humanitarian and family consideration, and in the context of his health - he does have a cardiac problem,” he said.

He further acknowledged that the OCI had gone through a “traumatic” period following the resignations of vice-president John Delaney and treasurer Kevin Kilty ahead of an executive committee meeting on Thursday.

When asked if the OCI was in a suitable condition to carry out its work given the resignations of the board members, Sport Ireland chief executive John Treacy said the organisation was in what was traditionally a quiet period for Olympic bodies.

“For any Olympic committee around the world this is a downtime for them.

“The Games have just happened so obviously they have the Deloitte report, they will review that,” he said, referring to a report into the Irish Olympic ticketing controversy which was commissioned by the OCI.

Mr Treacy refused to comment on any aspect of the inquiry being carried out by retired High Court judge Carroll Moran into the ticketing controversy.

Minister of State for Sport Patrick O’Donovan, whose department established the inquiry, also refused to comment on the investigation.

“We’re anxious, obviously, that this is drawn to a conclusion and the sooner we get a report the better.

“But by the same token I would be clear that any time Mr Justice Moran requires he’ll be given,” Mr O’Donovan said.