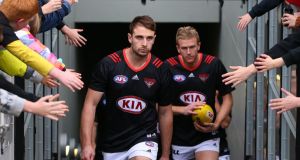 This is despite Wada (the world anti-doping agency), the GAA and the Irish sports council all stating they have no issue with Jobe Watson and Dustin Fletcher representing Australia in tomorrow’s Test despite both being under investigation for doping offences.

“There is a rider in the AFL rules and it says the provisional suspension is at the discretion of the AFL commission, the governing body of the AFL.”

The AFL, having sought legal advice, lifted the provisional suspensions of Watson and Fletcher.

The GAA has refused to comment, as they would be embroiling themselves in the ongoing Essendon supplements controversy, which saw 34 players served infraction notices provisionally suspending them from playing for their club until the hearings are complete.

The Irish Times asked Wada if two of the 34 players should be allowed to represent Australia despite being served infraction notices.

“Presently, therefore, the World Anti-Doping Agency has no reason to intervene or to prevent the athletes from competing in the upcoming Australia versus Ireland International Rules series contest.”

“Under the Wada code if two or more players from a team are found to have committed an anti-doping rule violation then a sanction can be imposed against the team itself.

“Which raises another scenario; if two or more players on the Australia team end up being found guilty of doping offences the match result could be null and void. The result could be awarded to the Irish team.”