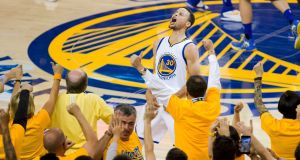 The Golden State Warriors came from behind to topple the Oklahoma City Thunder 96-88 in Monday’s Game 7 of the Western Conference finals, completing a rally from a 3-1 series deficit to seal a place in the NBA finals for the second year in a row.

Stephen Curry scored a game-high 36 points to spark the Warriors, who trailed by as many as 13 during the first half but used a 29-12 run in the third quarter to open an 11-point lead entering the fourth. His Golden State team-mate Klay Thompson added 21 points and six three-pointers to follow up his record-breaking performance in Game 6 on Saturday, when the Warriors needed a furious rally to force Monday’s winner-take-all finale.

Golden State become the 10th team in NBA history to rally from a three-games-to-one deficit in seven-game postseason series and win it.

“This may be the greatest team in the history of the NBA,” Thunder coach Billy Donovan said afterward. “They do things like make big shots and do some of those things. We were right there every step of the way with them, and this was a record-setting team and world champions. We’ve got to give them credit.”

The series outcome evoked the glass-half-full expression: were the Warriors are the only team good enough to pull off such a comeback – or were the Thunder the only team combustable enough to lose from such a winning position?

It might be that it was a little bit of both.

The history was not in the Thunder’s favor. Top-seeded teams were 28-3 in home Game 7s, according to ESPN. There have been 36 teams to lose Game 6 at home with a 3-2 series lead. Of those, less than half came back to win Game 7.

But more than that, Russell Westbrook was off his game, shooting for 7-for-21 from the floor on Monday night. Kevin Durant shot 10-for-19 for a total of 27 points, his lowest-scoring Game 7 performance ever.

“We laid it all out there,” a somber Durant said. “Everybody left their soul out on the court. We have no regrets.”

Warriors coach Steve Kerr said beforehand he was going to make “11 alterations to the gameplan”, one of which was starting Andre Iguodala after a strong showing in Game 6 instead of Harrison Barnes. Iguodala added seven points and was aggressive on defense.

Saturday’s Game 6 appeared to be the beginning of the end for the Thunder’s charmed postseason as Oklahoma City blew yet another lead in the fourth quarter. The Thunder were notorious for squandering leads in the final minutes of regular-season games. At one point their number of fourth-quarter collapses were worse than the Philadelphia 76ers, one of the worst teams in the league this year.

Bay Area natives Andy Samberg and E-40 were seen in the Oracle Arena crowd, as was Democratic presidential candidate Bernie Sanders, who arrived at half-time after campaigning in northern California.

Now the Cleveland Cavaliers will head to California for a much anticipated rematch of last year’s NBA finals, which the Warriors won in six games.

Game 1 is Thursday in Oakland.