After losing six kilos eating free-dried food, a burger and chips was more than welcome 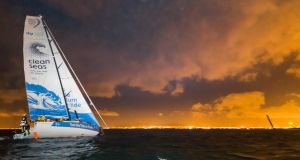 Annalise Murphy and her crew onboard Turn the Tide on Plastic arrive into Cape Town. Photo: Pedro Martinez/Volvo Ocean Race

A shade under three weeks since starting Leg 2 of the Volvo Ocean Race from Lisbon and it’s done and I now have 10,000 nautical miles of ocean racing under my belt which is precisely 10,000 more than I had three months ago.

It’s a really nice feeling coming ashore despite having to be bussed off to clear customs before getting a lovely feed of fresh food at the Volvo pavilion at the V&A Waterfront – burgers, chips and lovely pineapples.

For the past week, I’ve been thinking about having an ice-cold beer but when I took a sip it was horrible; and I’d been so looking forward to it!

That was Saturday evening and since then, as awesome as the leg was it really is very, very good to be back on dry land.

I should, perhaps, have gone out to dinner on Sunday evening but instead I stayed in and watched Strictly Come Dancing and Michael McIntyre’s Big Show just to have a taste of normal life.

It seems I’ve lost six kilos in weight as well.

We were warned that the freeze-dried food diet would do this so we were bulking up in Alicante and Lisbon before the big ocean leg. That’s a lot of ice-cream to burn off.

As far as the result into Cape Town goes, last place isn’t bothering us much at this point of the race. In fact, it was only a matter of one minute between us and Scallywag at the finish and that really typified the whole 6,500 nautical miles of this leg.

Time after time, they’d appear out of nowhere, duel with us then disappear for a day or two before we somehow merged again, sometimes with us ahead, other times they’d be ahead.

But overall, we were really pleased with our performance as we found after two or three days out that we could keep pace with the leaders comfortably without leaking mileage to them on each four-hour ‘sked’.

That means that our work getting up to speed is paying dividends that hopefully will become apparent later in the race when our experience starts to match the more established teams.

Nevertheless, you may recall last week’s log anticipated keeping in touch with the leaders less than 100 miles ahead as we approached Cape Town so that any light wind patch would allow us a fighting chance of catching them in sight of Table Mountain.

Well I spoke too soon.

Soon after, a massive ridge of high pressure effectively severed the fleet and the leading three boats got clean away.

The remainder of the seven-boat fleet were obliged to dive southwards towards the Roaring Forties to try and avoid getting becalmed. We sailed an added four hundred miles so any notion of being happy to stay on board for a little longer vanished.

We were all pretty happy to get off in Cape Town.

After getting the boat tidied-up on Sunday, we had a thorough team debrief and took away plenty of good learning points for the rest of the race that has still barely started.

Most of all, we have all bonded really well as a team and we’re improving all the time.

Our skipper (Dee Caffari) wants us to learn together as the youngest team in the race and for this reason we all get an equal voice at the table. On the other teams, with the minimum youth quota on board, it’ll be the older sailors calling the shots.

Above all, we know we can do better and improve our game.

As far as my game goes, I’ve spent my whole life in this sport but never sailed on a big offshore boat like this or even handled a winch before three months ago. So I’m still cautious, especially where I stand, move or put my hands. When I’m trimming on the runners (a movable part of the rigging) there can be 10 tonnes of load on the winch drum. While it’s a great workout, I’m also hugely aware that my hands are for life and this is just a race.

I’m also very wary of working on the bow – that’s a scary place and full respect to the crew who work up there. The pit area is full of ropes, like spaghetti and there are control jammers that could release something under load and create havoc – or worse.

But I love the driving, it’s exhausting but just so much fun!

My highlight of the trip is steering during the night-watch with Akzonobel just 0.7 miles ahead and Scallywag another mile behind. Constantly nudging the boat faster, making tiny gains and defending our place from the boat behind, playing each surfing wave and gust for hours on end.

When my watch ended, I vaguely recall staggering below and falling into my bunk and sleeping solidly for four hours, exhausted but happy.

Sleep becomes central to racing-life at sea but the sudden change to the routine means odd things happen.

My first night’s sleep ashore was just under four hours before I was wide awake and expecting to go on watch.

My second night had me out of bed shouting that we were becalmed and needed to do something as the boat clearly wasn’t moving. I’m in an apartment. Not going anywhere, wind or no wind.

That’ll pass and hopefully by the time I’m home in two weeks as I’m the first crew-member to be rested by missing this next leg which I’d love to be on. But the upside is that I’ll be home for Christmas before heading to Melbourne in time for the fourth leg to Hong Kong.

And it means I’ll be able to keep my long-standing promise to my family to cook Christmas dinner after my Ballymaloe course after all.