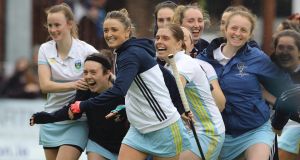 Clodagh Cassin produced the two performances of her life to earn UCD a third national title as the students added the EY Champions Trophy title at Grange Road to their amazing haul, seeing off their constant rivals Hermes-Monkstown.

“She’s never done anything like that before! I really don’t know where that came from,” joked skipper Deidre Duke while hailing her goalkeeper Cassin’s performance.

Incredibly, the Kilkenny woman kept clean sheets in both shootouts that UCD required to win this title, the climax of the women’s season.

On Saturday in the semi-final, she kept out everything Loreto could throw at her and, in the final, Hermes-Monkstown met a similar brick wall with Chloe Watkins, Ellen Curran and Rosie Carrigan all meeting the same fate.

With Katie Mullan and Sarah Twomey doing the business, it laid the base for Orla Patton to slot the winner for UCD.

Normal time had ended 1-1 after a cracking, end-to-end battle. Duke had gone closest to breaking the deadlock with a backhand volley that struck the base of the post before Hermes-Monkstown took the lead.

In Anna O’Flanagan, they have the runaway top-scorer with 40 goals prior to the final and she snapped up the one chance to fall her way in the first half. As so often, Nikki Evans was the creator with a delightful cut inside from the right wing, leading Lena Tice and Leah Ewart on a merry dance before flipping the ball into the path of O’Flanagan who swiped home.

UCD were creating the better chances but spurned openings for Gillian Pinder – the player of the tournament – and Jane O’Brien.

Four Hermes-Monkstown penalty corners went awry either side of half-time before UCD won their first and promptly levelled.

It was not a thing of beauty as the first phase was blocked down and Tice’s shot was off course but Emma Russell sniffed a chance and pounced on the ball at the right post to guide it in.

The goal awoke Monkstown who bossed much of the final quarter with Cassin denying Watkins on a couple of occasions while Sinead Loughran was inches from a second goal.

The shootout, however, was looming and Cassin stepped up to add the Champions Trophy title to the Irish Senior Cup title won last month and the EY Hockey League crown landed earlier in April.

Earlier on Sunday, Belfast Harlequins avoided relegation with a 3-1 win over Lurgan in the EYHL promotion-relegation battle. Lucy Geddes gave them the perfect start with a second-minute goal before Rachel and Laura Johnston put them three to the good. Kerrie Burns got one back but could not affect the outcome of the tie.

England and Wales Cricket Board to announce financial aid passage for game 19:30
Billy Joe Saunders apologises for video of 'advice' on how to hit women 19:15
Aleksander Ceferin concedes current season may never be finished 18:57
‘Magnificent’ Conor Connelly remembered after sudden death 16:51
TV View: Mícheál Ó Muircheartaigh helping us all keep the faith 16:34
Here is your handy guide to sport on television this week