Joshua and Klitschko deliver one of the great sporting nights 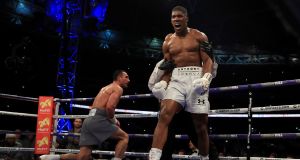 From the moment he paraded on to the Wembley turf Anthony Joshua’s World heavyweight title fight with Vladimir Klitschko was already of greater dimensions than any that had gone before.

A long line of his team trailed behind him like torch bearers, the halogen lights of the television cameras capturing him in a pocket of silver glow in the darkness, a 6ft 6’’ gladiator wrapped in a white robe, rockets flaring up from behind and strobe lights crisscrossing.

His final move before the ring was to a raised ramp, where the goals would normally be in the iconic ground and there he momentarily stood still so that all 90,000 people could see. Giant AJ initials either side of him then burst into flames.

In that there was almost a metaphor at play, there was almost a temptation of fate too that nothing that came after would be as strikingly dramatic. Joshua, after all, had won 13 of his previous 18 professional fights inside two rounds.

That, even for a wholly partisan crowd, would have been way too brief to be brilliant in North London.

Have you ever seen anything like this American heavyweight, WBC champion and interested onlooker, Deontay Wilder was asked by Sky as the beginning of the fight neared.

“Oh my god, I’ve never seen nothing like this before,” he gushed. “My voice is oozing with excitement. This is amazing right here.”

In the ring Klitschko waited stony faced, not distracted, his walk along the perimeter, around the backline and to the centre more earnest and without the full scale Joshua theatre that had put the Londoner in character for a coronation.

Joshua subsequently earned his crown and gave it back only to take it again and hold on to it. With that sequence of fortune and hardship the impact was of a greater magnitude that promoter Eddie Hearn could have hoped.

With it the heavyweight division reclaimed some ground it had lost many years before.

With Klitschko falling in the fifth round before rising to his unsteady feet to put down Joshua in the next for the first time in his career, the contest was opened up to any number of endings.

That Joshua also rose up dazed and unsteady to fight back, find his feet and in the 11th round finally compel the referee to step in, was the final elevating twist.

A brutal string of shots that began with a right uppercut and a smothering of blows signaled the first knock down of the final round.

A left connection and a rain of backup shots put Klitschko down again before he dragged himself to his feet.

The final piece of work corralled the weakened and emptied former champion in the corner, the first few of Joshua’s volley inviting the referee to wave it over.

It is often the way benign emperors of 41-years-old go to younger 27-year-old princes who have fire and ambition and the level of determination to carry out their work. And so Joshua walked away as the new WBA, IBF and IBO heavyweight world champion.

The two fighters delivered one of the great sporting nights both relying on survival instincts and pulling on strings of hope and survival in the face of countless odds, Klitschko doing it three times before they would allow him no more.

“As boxing states, you leave your ego at the door and you respect your opponent,” said Joshua underpinning his dominant world position with humility.

Klitschko was more considered. The fallen champion, erudite and capable remained just that.

“I thought he wouldn’t get up,” said Klitschko. “He managed to get up: respect. From that moment I felt he was out of gas and concentration. He recovered through the rounds.

“I could have done more to finish him off after he went down, but I was pretty sure ‘This is going to be my night’ so I took my time.

“I got caught and the blood was streaming into my eye, and it was difficult to see due to the thickness of the blood.

On the night it was a common view.