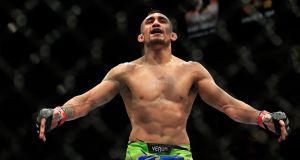 UFC president Dana White says Conor McGregor intends to return to the Octagon by the end of the year with Tony Ferguson calling out the Irish fighter after landing the interim lightweight belt in Las Vegas on Saturday night.

At the post-fight press conference White was asked if he had spoken to McGregor about his future plans – and White confirmed he had.

He said: “He wants to fight again this year.

“He went and partied in Ibiza for a while, he went back home for a while and you’ve got to let him blow off some steam and we’ll figure it out.”

Ferguson defeated Kevin Lee with a third-round triangle choke submission at the T-Mobile Arena on Saturday night and afterwards claimed the Irishman is “scared”.

The 23-3 fighter said he would be ready to take on McGregor as soon as “next week” and called on him to “defend or vacate” his UFC lightweight champion belt.

When talking about a potential match-up with the Irishman, Ferguson said: “I’ll ankle-pick him. No problem. I’ll sit him on his ass and everyone is the same size on the ground.

“Conor McGregor poses no threat to me, especially when I hit him with the jab, he’s going to be running away like Katsunori Kikuno did and I’ll be chasing after his ass like a cornerback.

“And I’ll slam him on the ground and finish him with a D’Arce choke or any choke I might please.

Addressing McGregor he added: “You’re in check and I’m great at chess.”

McGregor is the reigning UFC lightweight champion after defeating Eddie Alvarez in November 2016 in New York.

But the Irishman is yet to defend the belt, having taken on Floyd Mayweather Junior in August at the same arena which hosted UFC 216 on Saturday night.

While still in the octagon, Ferguson addressed McGregor as McNuggets and said he was going to “kick the ass” of the Irishman.

“You better come and f*****g defend that belt. Defend or vacate,” he added.

Opponent Ray Borg, who went into the fight with an 11-2 record, found himself on the back foot from the off as Johnson landed leg kicks throughout the first round.

At the end of the second, Johnson had landed 62 strikes to Borg’s one and – three rounds later – the champion threw Borg to the mat, grabbed his arm and forced a submission at 3:15.