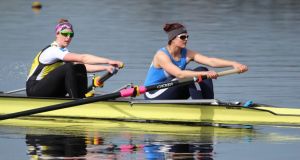 The Ireland women’s pair of Leonora Kennedy (left) and Monika Dukarska (right), which won gold in Italy, in training.

Ill winds may have caused the postponement of Skibbereen Regatta (it has be refixed on one day, May 3rd) but the forecast is good for Trinity Regatta at Islandbridge.

There is a long day’s action on Saturday, but competition begins this evening, when the session inlcludes two semi-finals of the men’s single sculls: Ian Hurley, who won at Neptune Regatta, takes on Fionnán Groome, who took the intermediate singles at the same event, while David Butler takes on Damien Kelly in the other side of the draw.

The intermediate men’s eight, with entries from Reading Blue Coat School, UCD, Queen’s and the host club, should be a highlight. However, the senior men’s and women’s eights’ have entries only from Trinity, which is a pity.

In the perfect conditions of Varese in northern Italy, an Ireland crew which could go all way to the Olympic Games next year worked together for the first time on Thursday. Helen Hannigan and Lisa Dilleen have been selected as the Ireland women’s double for the European Championships in May, but Dilleen has been ill and Hannigan injured. The two were tested at the Ireland camp in Varese in Italy by Dr Valery Kleshnev, a world-renowned expert in the use of biomechanics to improve rowing technique.

Top single sculler Sanita Puspure, though still recovering from the nasty head cold which forced her out of Sunday’s action at the Memorial Paolo d’Aloja in Piediluco, has been training and was also set to be tested by Kleshnev.