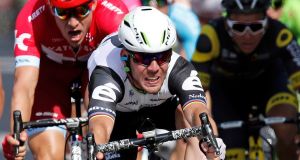 Team Dimension Data rider Mark Cavendish shows the strain as he stretches for the line in winning the sixth stage of the Tour de France from Arpajon-sur-Cere to Montauban. Photograph: Jean-Paul Pelissier/Reuters

Mark Cavendish moved into second place all-time for Tour de France stage wins as he collected his 29th victory on stage six in Montauban on Thursday.

Cavendish’s third win of the 2016 Tour came ahead of Germany’s Marcel Kittel, and a fine third place for British Tour debutant Dan McLay – his fourth top-10 finish of his opening Tour.

Cavendish’s victory on stage three had moved him level with five-time Tour winner Bernard Hinault on 28 Tour stage wins, but he is now alone in second place and five behind Eddy Merckx’s record of 34.

Cavendish sat on the wheel of Etixx-QuickStep’s Kittel as they came into Montauban, and launched himself forward in the final 200 metres.

Finishing fastest of all was Fortuneo-Vital Concept’s McLay but the 24-year-old ran out of road as Team Dimension Data’s Cavendish punched the air for the third time this week.

The 31-year-old has enjoyed some fantastic Tours in the past, winning six stages in 2009 and five each in 2010 and 2011, but has never before collected three wins in the first six days.

Ireland’s Dan Martin remains in 10th position overall after he was placed in 33rd position during the closing sprint.

“Oh my god, that was terrifying,” Cavendish said. “That was like the old days, wheel surfing. I was a little too far back going into that so it was just carnage in the final. I wanted Kittel’s wheel and I was fighting for it.

“I knew it would be the right thing to go early because it was slightly downhill, I put the bigger gear on again but I maxed out and should have put a bigger gear on. I held on and held Kittel off, did to him what he’s done to me over the last three years.”

Cavendish’s win on the first stage to Utah Beach on Saturday put him in the yellow jersey for the first time in his career, and this victory here puts him back in green as he moves back to the top of the points classification ahead of Tinkoff’s Peter Sagan.

BMC’s Greg Van Avermaet finished safely in the pack to retain the yellow jersey he took on Wednesday.