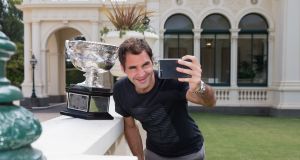 Switzerland’s Roger Federer taking a selfie of himself with the Australian Open trophy at Government House in Melbourne. Photograph: Fiona Hamilton/AFP/Getty Images

An intriguing scenario is unfolding in the wake of Roger Federer’s sixth Australian Open triumph in which the ageless Swiss arrives at the 2020 Tokyo Olympics to join his long-time rivals, Rafael Nadal, Novak Djokovic and Andy Murray, in a grand farewell to their illustrious careers.

It is not inconceivable the 36-year-old champion, rejuvenated yet again in the twilight of his career by winning his 20th major in a dramatic five-setter against Marin Cilic on Sunday, will continue playing as long as his body can take it – and while his wife, Mirka, is prepared to travel the world with him and their four children.

The one prize that eludes him is an Olympic singles gold medal – and that might be incentive enough for him to qualify for Tokyo by returning to Davis Cup duty for his country – although he is in no shape to join his compatriots in Kazakhstan this weekend.

Meanwhile, 31-year-old Nadal, who is getting over the knee injury that forced his fifth-set retirement in the quarter-finals against Cilic, and the 30-year-olds, Djokovic and Murray, are struggling to get their careers back on track. (None is playing Davis Cup this week; but all of them want to go to the Olympics).

Djokovic and Murray each took six months off after going out on day nine of Wimbledon last year and both have found long-term injuries stubbornly resistant to all expensive and high-grade rehab.

Djokovic is considering surgery on his chronically painful serving elbow, while Murray, who scrapped plans for an Australian comeback at the last minute, is recovering from hip surgery that will keep him off the Tour until just before Wimbledon.

Throw in Stan Wawrinka, who was coming back from knee surgery but found the rising (and controversial) American Tennys Sandgren too strong for him in round two, and the old order looks very much in a state of meltdown.

Murray, who defended his Olympic gold medal in Rio, has said in the past he could envisage playing on until he was 32 or 33; Djokovic, who was born within a week of the Scot but has twice fallen short in the Olympics, recently revealed he could compete until he was 40 – although that looks fanciful.

As it stands, Federer is outlasting all of them. And, while their future is not guaranteed in such a physical sport, their will is so strong they will be inspired by the deeds of the others to play for as long as they can.

During a post-final photo-shoot in Melbourne on Monday, Federer betrayed the draining effect the three-hour final had on him.

“I’m just tired,” he said. “I had a few hours sleep. Still a bit confused it’s all over and that I was able to do it.”

But his enthusiasm is undimmed. In the immediate afterglow of his edgy victory, Federer left open the prospect of an extended finish to his career with the sort of guarded response that hints at a career in politics when he eventually does retire from the sport he has graced with skill and class for nearly two decades.

Asked how long he could resist the challenges of the contenders stretching their young limbs with increasing impatience as the Big Four linger near the exit door, Federer said: “Honestly, I don’t know. I have no idea. I’ve won three slams now in 12 months. I can’t believe it myself. I’ve just got to keep a good schedule, stay hungry, then maybe good things can happen. Then I don’t think age is an issue, per se. It’s just a number.

“But I need to be very careful in my planning, decide beforehand what are my goals, what are my priorities. I think that’s what’s going to dictate how successful I will be. Exciting times ahead.”

Federer says “not playing every tournament possible” has added years to his career. “I enjoy practice, don’t mind the travel. I have a great team around me. They make it possible. At the end, it’s seeing that my parents are incredibly proud and happy that I’m still doing it. They enjoy coming to tournaments. That makes me happy and play better.”

However, key to his decision will be Mirka, who was there again courtside to see him threaten an embarrassingly quick demolition of Cilic then swoop and dip alarmingly and finish with ruthless urgency to win 6-2, 6-7 (5), 6-3, 3-6, 6-1, under the roof on the Rod Laver Arena.

As he said later: “My wife makes it all possible. Without her support, I wouldn’t have been playing tennis for many years. We had a very open conversation, if she was happy to do this or not, years ago. I’m happy that she’s super supportive, and she’s willing to take on a massive workload with the kiddies.

“Same for me, because I wouldn’t want to be away from my kids for more than two weeks. This life wouldn’t work if she said no. Many puzzles need to fit together for me to be able to sit here.”

And there are a few puzzles left to solve.

1 Seán O’Brien: Anger over my parents’ break-up never left me
2 Madness or defiance? The GAA is taking a huge gamble in staging Championships
3 Plenty of positives for Farrell as Ireland hit the ground running
4 Will Connors chops his way to the front of Ireland’s openside queue
5 Ireland 50 Italy 17: Ireland player ratings
Real news has value SUBSCRIBE