Rathgar earn their first win in the top flight 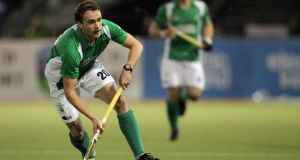 Mitch Darling and Peter Blakeney struck twice each in a convincing victory.

Blakeney scored a corner in each half to go with Darling’s opening effort and while Maurice Elliott got one back, Darling closed out the result.

Rovers followed up yesterday with a Mills Cup win over Glenanne, Blakeney grabbing the winner in a 3-2 win.

Pembroke’s woes were compounded by a 3-1 loss to Corinthian in the cup yesterday.

Shane Gould’s late goal gave Rathgar their very first win in the top tier as they saw off Fingal 2-1 at High School.

It boosted their hopes of avoiding the drop – moving them within a point of the ALSAA club with seven rounds of matches to play.

Shane Dempsey’s drag-flick put Fingal 1-0 up in the second half but Gary Sharman equalised soon after against his former club. Gould grabbed the winner with time running out to hand Rathgar full points .

It looks like those two will be the only contenders for the drop, though, as YMCA defended like demons to overcome UCD. The Y withstood the students’ attacks and picked off their goals from the chances that came their way with Andrew Walker and Andrew Meates on the mark.

Glenanne made the big move in the race for a top five place as they edged out Corinthians 4-3. Gary Shaw’s double underpinned their win.

It means they displace Railway Union, who lost 4-1 to Monkstown, in fifth. Andy Ewington’s two goals along with efforts from in-form striker Ross Watkins and Davy Carson saw Town run up a 4-1 win.