Sanita Purpure, Paul and Gary O’Donovan all get podium places in Varese, Italy 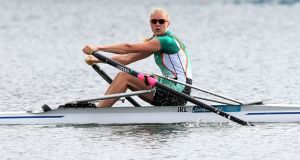 Some days sport has a sparkle. Sanita Puspure stood with her children, Daniela and Patrick, a tricolour around her shoulders and a bronze medal around her neck just after stepping off the podium. It capped another good day for Irish rowing, as the Ireland lightweight double of Paul and Gary O’Donovan had earlier taken silver at the World Cup in Varese in Italy.

Both crews finished brilliantly. Puspure was sixth and last through the middle of the single sculls final and looked to have only tentative hopes of a medal. Carling Zeeman of Canada grabbed what had been a tentative, close, race by the scruff of the neck in the third quarter, and the Canadian looked unlikely to be caught. Then Ekaterina Karsten, a double Olympic champion, wound it up, and Puspure charged. Both produced remarkable finishes, but could not quite catch Zeeman, taking silver and bronze respectively.

Puspure explained that her tactics had been to conserve energy in the middle of the race, and while she was “a little bit worried” to be so far behind with 600 metres to go, she was reasonably happy with the outcome when she turned on the power from there. “It’s always a gamble, but I learned the lesson last year that you can always win from a long distance back,” she said.

That lesson was learnt the hard way: she led the B Final of the World Championships until the closing stages, where she was caught by the field. She needed to finish in the top three to nail down a Rio place, but finished fifth (11th overall). She faces into the Olympic qualification regatta next month.

The O’Donovan brothers have already qualified for Rio, and confirmed they are a crew on the rise in their final.

South Africa and Ireland were locked together through the middle of the race, but James Thompson and John Smith gained an outright lead through the final quarter. The O’Donovans sprinted through the last 250 metres to close right up, but South Africa held on to win by .23 of a second. Belgium took third.

Thompson and Smith were world champions in 2014, and formed half of the lightweight four which won gold at the Olympic Games in 2012. The Irish crew used them as a benchmark.

Gary O’Donovan said the crew were “happy out” after the win, but the emphasis was on using the World Cups as a learning ground and keeping feet on the ground. “Five out of the six finalists from the (2015) World Championships were not here - South Africa were the only one. There is more competition to come. But to be up there at a similar speed as the South Africans at the start of the season is very promising.”

Sinéad Jenings and Claire Lambe won the C Final of the women’s lightweight double on Saturday, placing 13th overall. Denise Walsh won the B Final of the lightweight single, to place seventh.

The finishing positions of the lightweight men’s four (16th overall) and women’s pair (15th) were not encouraging for their hopes of qualifying their boats for Rio.