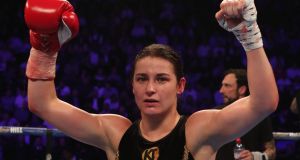 In the span of a career, such nights will be measured in increments of progress. Katie Taylor is not the finished article. But that has never been one of her claims. If any night in her short career so far illustrated what a steep professional curve she has undertaken, the way Viviane Obenauf kept coming back and back will help to reinforce that there are aspects of this game that are still a work in progress.

Taylor and her team most of all recognise those “amateur” traits that need ironing out. But they were in no mood to shy away from a good win in Manchester being just that.

Taylor was never in danger of losing her second professional fight. The frustration as she goes into the Christmas break before renewing the challenge for an eventual tilt at a world title is that the fight was not finished earlier against a limited but durable opponent.

“A bit of a flat performance tonight,” said the Olympic gold medallist. “But it was good to get the six rounds. It was a bit of an experience. A win’s a win; I suppose that is the most important thing.

“She [Obenauf] was a tough girl, yeah, she was obviously durable. She was coming in, obviously on a good winning record, so . . . I felt flat out there at times . . . Obviously a quick turnover and the last fight as well.”

The short head-turning spin from Rio to Wembley Arena last month and to Manchester Arena on Saturday, with all the television lights, the 21,000 crowd and the waiting around as television sorted out its schedule, marked another difference in the breadth of Matchroom Boxing and Eddie Hearn’s enterprise.

Taylor is now linked with British world heavyweight champion Anthony Joshua, one of the biggest names in boxing, with a fight now a possibility in Wembley Stadium on the undercard of Joshua against Vladimir Klitschko in April. But first things first.

“Just a bit tired tonight,” said Taylor. “Also so warm in there as well . . . You get days like that, don’t you? I think the most important thing is to get the win and six rounds.

“It was great to get the six rounds in. You can’t actually buy that experience. You can do rounds of sparring, but it’s so different in there in a competitive fight, so you can’t buy that.”

Her bout was a floater, and from originally being scheduled to start between 8pm and 9pm, it began much later.

“I think I went in well prepared. I don’t think that was an issue,” she said. “I wouldn’t use that as any sort of excuse. I knew roughly what time I was on. That was fine.”

At the beginning of the second round, 30-year-old Obenauf was put on the canvas, and although she protested that it was not a knockdown, the referee gave her a standing count. This was a point in the bout when Taylor’s amateur instincts might have overruled the jungle law that now governs her profession.

She stood off and dutifully continued fighting when she might instead have become a more ruthless opponent, inflicting pain while her opponent was momentarily vulnerable.

“When she went down, I kinda stepped back,” said Taylor. “A bit amateur, I think. I probably should have jumped on her a bit. That’s where experience comes in. It was a great fight to have. With world titles and stuff next year, it was definitely a step up, the right kind of fight for me . . . I was a bit tired out there. I was happy to take the big step back, to be honest.”

If the continued link with Joshua evolves, Taylor could find herself fighting in front of 80,000 at Wembley. As a heavyweight champion, Joshua can raise British hopes and a sense of national wellbeing higher than most as long as he is winning.

David Haye and the other heavyweights who are jostling for position behind Joshua also have a following. But they are as much reviled as loved, and when Haye ambled up to his ringside seat, grinning with the self-satisfaction of having made an entrance, it seemed like the entire arena, the biggest in Britain, was booing his arrival.

“It was a privilege to box on a platform like this,” said Taylor. “When I started boxing I dreamed of these nights. It’s what I was born to do and it’s a massive privilege to wake up and do it.

“Yeah, I’d love to be headlining these shows in the future, so what an honour to be boxing on an Anthony Joshua undercard. He’s one of the biggest names in boxing.”

All has changed. So what is next?

Well, not everything has changed.