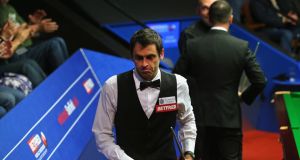 Ronnie O’Sullivan crumbled at the Crucible as Stuart Bingham sent the five-time winner crashing out of the World Championships.

While 38-year-old Bingham advances to a semi-final against Judd Trump, O’Sullivan heads home before the final for the first time in four years.

O’Sullivan said: “I’ve had 20 years at the top, eventually there has to be a changing of the guard.”

Bingham, meanwhile, was in tears after reeling off five successive frames to sweep to victory.

Stunned by his achievement, the world number 10 sought some privacy briefly after his match, and wept as he spoke on the telephone to wife Michelle.

“It’s unbelievable,” Bingham said. “I lost the first frame tonight but then didn’t miss a ball, or that’s how it felt.

“I’m so looking forward to tomorrow for the one-table set-up.

“I went back into my room just now and had a little tear and phoned the missus up and I couldn’t speak.

“She said she wished she was here to give me a little cuddle.”

Body language in the arena suggested O’Sullivan was lacking the enthusiasm and focus necessary for such battles, meaning Bingham’s 13-9 victory was richly deserved.

He sealed it with a break of 66 and O’Sullivan stepped forward to offer his congratulations. Bingham had a 145 in the match too, matching Neil Robertson for the highest break so far.

While Bingham was raring to go, O’Sullivan looked well short of his best, offering flashes of brilliance but also making elementary errors.

Bingham led 5-3 after the opening session, was still firmly in the match at 8-8 after Wednesday’s morning’s eight frames, and returned to seize control of a contest many would have expected O’Sullivan to sweep through.

A shaky first frame of the evening went O’Sullivan’s way, but Bingham then ploughed in breaks of 74, 51 and 85, plus an 88 which consisted of 11 reds and blacks, before completing the job.

Beaten O’Sullivan said: “I was off the pace. I’ve no complaints, I was the second best player and deserved to lose the match. I made so many unforced errors.

“Before you might have got away with it but now you get punished by all the players.”

Asked how he would react, O’Sullivan said: “Hopefully I’ll be gutted and hurt.

“But tomorrow I’ll go for a run in the morning and sparring in the afternoon. Life has to go on and will go on.”

O’Sullivan crushed Bingham 13-4 two years ago in Sheffield, also at the quarter-final stage, so this revenge was sweet.

Trump looks teak tough though, and polished off a 13-4 win over Ding Junhui in Wednesday’s morning session. He went back to bed to get over a feverish illness but vowed to be ready for the semi-final.

Bingham said: “He looks like he’s flying out of his boots but I’m still in it and I’ve got a chance.

“Hopefully I’ll get some sleep tonight and come back and enjoy it.

“I’ve been an underdog all my life. I’ll just do my own thing.

“Judd is a very confident person, a good lad. He’s got to a final before and feels like he can beat anyone.

“We all do in this situation.”

Eye-catching qualifier McGill had knocked out Stephen Maguire and defending champion Mark Selby. But Murphy, 10 years on from his own Crucible triumph, had the 24-year-old’s measure and closed out a 13-8 success.

Neil Robertson and Barry Hawkins looked like they were going to the wire, tied at 11-11 as a high-quality evening session gripped those in the arena. They resumed with Hawkins 8-7 ahead, and he fired three centuries to two from Robertson in a spectacular run of scoring.

That suited Murphy, who said: “I really hope they go 13-12 on a re-spot until two in the morning and one of them can’t stand up tomorrow.”

Hawkins eventually got over the line, and next opponent Murphy got his wish for 13-12, yet they finished at 10:41pm rather than the early hours.

The eight centuries in the match matched a Crucible record, but it took a break of just 61 from Hawkins to settle the decider.

Beaten Robertson said: “It was a match where I seemed to pull him along with the standard.

“I truly believe I’ve underachieved in my career and I need to put the work in to fulfil my potential.

“Barry has got a great chance now. It’s going to be interesting because Ronnie’s got beaten.”

Hawkins, a beaten finalist two years ago and a semi-finalist in 2014, said: “I’m so delighted to get through.

“I don’t know what it is about the Crucible, it just seems to bring the best out of me.”

Chelsea condemn Liverpool to latest defeat; Gordon Elliott hearing to begin
Here is your handy guide to sport on television this week