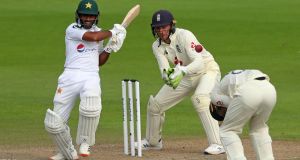 In the old days the advice would be to make sure you turn up on time on Saturday because this is the type of match where every ball seems to count. After three days of captivating cricket Pakistan are the favourites to win the match. They lead by 244 and have two wickets remaining; all their batsmen have gone. Even if the last two were dismissed immediately on Saturday morning England would be faced with a formidable target on a surface that is becoming increasingly dry and unreliable.

But if just two England batsmen could cobble together significant scores then an amazing heist remains possible. Pakistan have dominated nearly all of the past three days yet in a bizarre final session England, who were far from flawless out there, contrived to take seven wickets. And the game is still alive. As is Ben Stokes, who did his utmost to deliver his Lazarus impressions by snatching the ball late in the day and taking two wickets. Whether that affects his fitness for the next Test remains to be seen.

There were other moments of mystification. Chris Woakes was England’s most potent-looking bowler and took two wickets yet bowled only five overs in Pakistan’s second innings. Dom Bess struggled to find a consistent length yet Joe Root kept the faith for a remarkably long time. Unusually Jimmy Anderson was below his best in his second spell.

But such queries can wait until the end of the match; they may evaporate if England somehow knock off the runs. One certainty is that Stokes is more likely to bat well in the second innings because he is an all-action cricketer and he has been in the game even if he was hobbling at the end of a long day.

Pakistan’s faltering progress in their second innings, despite the comforting ballast that stems from a three-figure lead, highlighted the difficulties of batting on a deteriorating surface even though England did not help themselves.

Stokes, stationed too close to Root, dropped a relatively straightforward catch off Anderson, who kicked the turf with a venom not seen since the halcyon days of Angus Fraser. Yet the wickets kept coming. Shan Masood, the heroic centurion of the first innings, failed to score after edging down the legside off Stuart Broad.

Abid Ali, who had benefited from the Stokes drop, holed out in Bess’s first over. Then Woakes intervened with the vital wicket of Babar Azam, caught by Stokes and then striking the front pad of Azhar Ali, which produced an unreviewable lbw.

A partnership of 38 between Asad Shafiq and Mohammad Rizwan was tilting the balance further in Pakistan’s direction when Dominic Sibley made his first impression on the game. The batsmen hesitated over a single and the new sleek Sibley swooped and hit the stumps with Shafiq almost out of the picture. Stokes was resurrected to take two wickets, Broad removed Shadab and the final-innings equation was almost complete.

Given that England were 12 for three inside six overs in their first innings a total of 219 could have been much worse. In the morning session the ball beat the bat so frequently that it was a minor miracle that they had lost only one wicket by lunch after resuming on 92 for four.

In the first hour the total advanced by 19 runs and eight of those were byes. The Pakistan pacemen were on target. Jos Buttler managed one scoring shot. Even the busy Ollie Pope was becalmed. It sounds dull; it was actually riveting. Pope posted an invaluable half-century and then there was no disgrace in his departure. A delivery from Naseem Shah jumped, took the edge of his bat and terminated in the hands of Shadab in the gully.

Out came Woakes, not the reassuring sight that it once was since he had only scored more than six once in his previous nine Test innings. He ducked into his third delivery from Naseem and the ball sped to midwicket off his helmet. Yet he soon reached double figures with pleasant drives off the pacemen and by lunch England had scraped to 159 for five.

However the innings subsided after the break and the architect of England’s demise were the wrist spinners. Until this point Yasir Shah had been unreliable but that all changed after his second ball of the afternoon. The first, bowled to Buttler, was left as it spun a long way from outside the off stump; the second had a peculiarly devious quality: it was straight. Buttler pushed forward with a barely discernible gap between bat and pad and the ball passed through it to clip his off-stump.

Now Yasir was transformed; he was relaxed yet still feverish for the fray and he began to hit his length far more frequently. Bess pushed forward and the ball turned and bounced before brushing his glove and being nimbly caught by a diving Shafiq at slip. Then Woakes was bowled for 19 by a quicker top-spinner, which he was trying to pull.

Stuart Broad threatened another technicolour counterattack and he ended up unbeaten on 29 after playing some bold strokes but this time he could not impart significant damage. He took three boundaries in an over against Afridi, two of which came from the middle of the bat; this prompted Azhar Ali to remove Afridi after one over and turn to his second leg-spinner, Shadab. There were some high jinx but Shadab soon ended up with two wickets as Pakistan ended up with a significant lead. How significant we discover on Saturday. – Guardian