Steve Smith stands down as captain of IPL side Rajasthan Royals 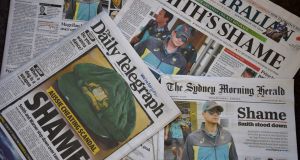 Australia captain Steve Smith has stood down as skipper of the Rajasthan Royals as the furore surrounding cricket’s latest ball-tampering row deepens.

Smith said he had taken the decision “in the best interest” of the Indian Premier League franchise ahead of the new season, which starts next week.

The 28-year-old’s future as leader of the national team is also under intense scrutiny as investigations continue into events during Australia’s third Test defeat against South Africa in Cape Town.

Smith has already been banned from the fourth Test, which begins on Friday, by the International Cricket Council after admitting trying to change the condition of the ball.

The scandal came to light on Saturday after Cameron Bancroft was caught on camera hiding sticky tape, which he had used to manipulate the ball with debris from the pitch, down his trousers.

Smith will be replaced as Royals captain by Ajinkya Rahane.

“Steve believes given the current circumstances, ‘It’s in the best interest of the Rajasthan Royals that he steps down as captain so the team can get ready for the start of the IPL without the ongoing distractions’.”

Co-owner Manoj Badale said: “Rajasthan Royals will do everything possible to protect the values and the integrity of the game.

“We agree with Steve’s decision to step down as captain, and we are fortunate to have such a capable successor with Ajinkya Rahane.

“It is important that all cricket fans retain a balanced perspective on the situation. What happened in South Africa was clearly wrong, especially given that it appears to have been premeditated.

“That said, this will be a difficult time for Steve as well, given how much he cares about the game.”

Cricket Australia (CA) is conducting an investigation “as a matter of urgency”.

Chief executive James Sutherland is due to arrive in South Africa on Tuesday, while head of integrity Iain Roy and Pat Howard, head of team performance, are also due to land in Cape Town.

Sutherland said: “We know Australians want answers and we will keep you updated on our findings and next steps, as a matter of urgency.”

The affair has reached a high level with Australian Prime Minister Malcolm Turnbull calling on CA to take “decisive action”.

Questions are also being asked as to how long such malpractice has been going on and whether England might have suffered during last winter’s Ashes series.

Social media footage emerged on Sunday showing Bancroft appearing to put sugar in his pocket during a break in play on day two of the final Ashes Test in Sydney.

CA did not comment when asked if that incident and the series, which England lost 4-0, would be reviewed.

England bowler Stuart Broad, speaking on Sunday, said he had no reason to suspect Australia employed illegal tactics against them, but was struggling to work out why they have chosen to do so in South Africa.

CA also clarified that all of the Australia Test squad were currently in South Africa to help with the investigation after there had been reports that Smith had flown home.

A statement read: “Cricket Australia can confirm that all members of the touring Test squad currently remain in South Africa.

“At this stage, players will remain in South Africa to assist CA with inquiries.”

Australia’s major cricket sponsors, including Qantas Airways, breakfast cereal maker Sanitarium and brewer Lion, said on Monday they were assessing their relationship with the country’s favourite pastime as the fallout from a ball-tampering scandal escalates.

Weetbix-maker Sanitarium, which counts Smith as a brand ambassador, said it was reviewing its sponsorship pending the outcome of the investigation by governing body Cricket Australia.

“Certainly it’s under review as the actions taken by the team in South Africa don’t align with our own values - Sanitarium does not condone cheating in sport,” Sanitarium said in a statement.

The sentiment was mirrored by almost all of the sport’s commercial partners in Australia, including Qantas, apparel sponsor ASICS, Commonwealth Bank of Australia, insurer Bupa, Specsavers, Toyota, and brewer Lion, which owns beer sponsor XXXX.

“Like the rest of Australia, we’re deeply concerned,” a Lion spokesman said in a statement. “This is not what you’d expect from anyone in sport at any level.”

Singapore Telecommunications’ Optus, which is a commercial partner and broadcasts cricket on its mobile network, said it would not comment on the incident as it was a matter for Cricket Australia.

“This is deeply disappointing and certainly not what anyone expects from our national cricket team,” Qantas said in a statement. “We are in discussions with Cricket Australia as this issue unfolds.”

Cricket Australia earned A$338.4 million (€211 m) in media, sponsorship and spectator fees in the financial year ended June 30th, 2017, according to its most recent annual report. The value of its individual sponsorships are not disclosed.