Steve Smith and David Warner both banned for a year 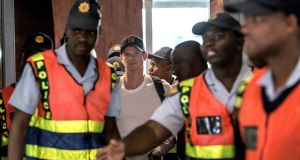 Steve Smith and David Warner have been banned from representing their country for a year – with nine months for Cameron Bancroft – after Cricket Australia came down hard on the three players involved in ball-tampering.

The sanctions were announced on Wednesday in a damning statement from the governing body, with Smith also stood down from his captaincy role for a minimum 12-month period. Warner is stripped of his position as deputy and will never again be considered for a leadership role.

Warner has been painted in the worst light, with Cricket Australia stating that the vice-captain was behind the plan, and instructed Bancroft to scuff the ball using sandpaper - not sticky tape, as previously claimed - with additional advice on how to do so during the 322-run defeat to South Africa in Cape Town.

Smith was privy to this but did not prevent it and, along with Bancroft, deliberately misled the on-field umpires when they stepped in. Both players are also noted to have misled the public in their post-play press conference, while Warner is accused of not being truthful with the match referee.

In addition to their national suspension, all three players will be barred from representing their states in the Sheffield Shield during this time and cannot play in the next edition of Australia’s Big Bash League.

Overseas assignments, such as English county cricket the Indian Premier League and, appear to be theoretically permitted. However the latter has now barred Smith and Warner from take up their respective £1.3m deals with Rajasthan Royals and Sunrisers Hyderabad this year.

Cricket Australia Chairman, David Peever said: “These are significant penalties for professional players and the Board does not impose them lightly. It is hoped that following a period of suspension, the players will be able to return to playing the game they love and eventually rebuild their careers.”

The punishments appear draconian when held up against the one-Test ban Smith received from the International Cricket Council. Bancroft was simply fined.

But Cricket Australia and its chief executive, James Sutherland, have been under pressure from the public back home, sponsors and even the prime minister, Malcolm Turnbull, to make an example of those involved.

After an investigation by his head of integrity, Iain Roy, Sutherland had announced on Tuesday evening that no other team-mates or support staff – including head coach Darren Lehmann – had been aware on the plan hatched during the lunch break at Newlands.

All three have the right to appeal their punishments – they would get a hearing from an independent commissioner – and have been offered support from the Australian Cricketers’ Association should they choose to go down this road.

Without an IPL berth next month, Smith could now seek a county cricket deal. It would allow the world’s No 1 Test batsman to prepare fully for defences of both the World Cup and the Ashes on English soil although overseas spots in this year’s county summer are now in short supply so close to its start on April 13th.

Whether Warner resumes his international career appears unclear, with the mood in the Australian camp having reportedly turned against him and his vocal position in last year’s pay dispute has left few allies at board level. A career on the overseas domestic Twenty20 circuit may well beckon.

The 31-year-old, who earlier on Tuesday stood down as captain of his IPL side, before the BCCI ruled out his and Smith’s participation altogether, has also lost a personal sponsors with LG Australia opting not to renew an expiring deal.

Bancroft, who only made his Test debut at the start of Australia’s 4-0 Ashes victory, is due to play for Somerset this year and the club have put out two statements thus far saying they are monitoring his situation.