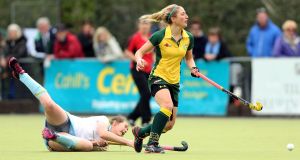 Railway Unions’s Kate McKenna created a goal in each half for Cecelia Joyce and Kate Dillon to secure Junior Cup success. Photograph: Inpho

For the second week running Railway Union got the better of UCD in a cup final, beating them 2-0 at Belfield on Sunday to retain the Irish Junior Cup, but the students prevailed in Saturday’s Hockey League meeting between the clubs to seal their place in the Champions Trophy.

Kate McKenna created a goal in each half for Cecelia Joyce and Kate Dillon to secure Railway their Junior Cup success, adding to the Jacqui Potter trophy they collected on St Patrick’s Day, but Saturday’s 2-1 Hockey League defeat to the same opposition leaves them three points adrift of third-placed Pegasus in the table and guaranteed qualification for the Champions Trophy.

Joyce was on the scoresheet on Saturday too, but Emma Russell and Katie Mullan got the goals, all three coming in the first half, that gave UCD their 10th win in a row and a guaranteed top three position – even in the highly unlikely event of them losing their four remaining games.

Cork Harlequins, four points behind UCD in second, need just one more win to be certain of reaching the season’s finale, a 3-0 victory over Pembroke Wanderers on Saturday, with the help of a Rebecca Barry double, edging them ever closer. But come Sunday they suffered a shock defeat in the quarter-finals of the Irish Senior Cup at Farmers Cross when they lost in a shoot-out to Belfast Harlequins after a 1-1 draw. Belfast meet neighbours Pegasus in next month’s semi-finals, with cup holders UCD facing Loreto.

Back in the Hockey League, bottom club Monkstown put up a spirited fight away to Pegasus, falling to just a single first quarter goal scored by Hannah Grieve. Trinity, five points above them, also suffered defeat, Jenna Watt and Zoe Wilson getting Belfast Harlequins’ goals in a 2-1 win. A late equaliser from Chloe Brown, meanwhile, gave Ards a 1-1 draw away to Loreto who had led through a first half Sarah Torrans score.