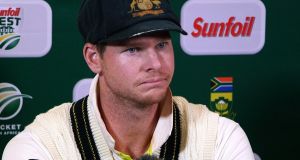 The signs do not augur well for Steve Smith and in terms of Cricket Australia’s ultimate response to the crisis.

Steve Smith looks set to be permanently stripped of the Australian captaincy and could face a ban of up to a year from representing the country following his leading role in the ball-tampering scandal that has engulfed the tour of South Africa.

Smith, who has already lost the captaincy of Rajasthan Royals for the upcoming Indian Premier League, is expected to learn his fate from Cricket Australia on Tuesday evening along with the vice-captain David Warner and opening batsman Cameron Bancroft.

James Sutherland, the CA chief executive, flew to Cape Town on Monday to join an investigation into the crisis that erupted on the third day of Australia’s 322-run defeat in the third Test with South Africa when the television cameras showed Bancroft using a piece of grit-covered sticky tape to scuff the ball.

Smith admitted his involvement in the plan, as well as that of the team’s “leadership group”, when attempting to come clean in the post-play press conference that day. The 28-year-old has since been banned for the fourth Test that starts in Johannesburg on Friday by the International Cricket Council.

But the punishments are not expected to end there. Bancroft, who escaped with a fine, faces being stood down for the series finale by Australia along with Warner, who is viewed as central to the scheme hatched during the lunch break. Queensland openers Joe Burns and Matt Renshaw are said to be on standby.

The signs do not augur well for Smith and Warner in terms of their board’s ultimate response to the crisis either, with reports in Australia suggesting sackings from their respective leadership roles are imminent. Suspensions of up to a year could now follow as a result.

Darren Lehmann, the head coach, was said to have no knowledge of the plan by Smith but he is also battling to keep his job as questions surround both the veracity of this claim and the culture of the Australian side overall.

Certainly MCC, the guardians of the laws and the spirit of the game, have taken a dim view, with a statement on Monday that read: “The behaviour of some of the players in the current South Africa/Australia series, and other incidents in recent times in the game we all cherish, has fallen well below the standard required to inspire future generations of cricket-loving families.”

Cricket Australia is under pressure at home from sponsors and the government, with the Australian Sports Commission reiterating calls for a “strong and decisive” action. It comes at a time when the board’s broadcast contracts are being renegotiated.

Sutherland will now join an investigation that began when the board’s head of integrity, Iain Roy, and Pat Howard, the high performance manager, started interviewing players and staff on Monday to ascertain who knew what.

Smith’s admission that a “leadership group” was involved is said to have caused unrest in the dressing room, with the Courier Mail reporting that Josh Hazlewood and Mitchell Starc are upset at the association and may ask their union to demand Cricket Australia clarify their lack of involvement publicly.

Suspensions for Smith and Warner would greatly damage Australia’s preparations for their defence of both the World Cup and the Ashes in 2019 too, with their one-day side touring England this summer.

Six-month bans would mean missing that five-match series in June and tours to Zimbabwe and Pakistan (in the UAE) that follow. But the suggestion in Australia is that any ban could even be extended to take part of their home summer also, when South Africa, India and Sri Lanka all visit.

Whether the pair will be prevented from featuring in the upcoming IPL season remains to be seen. But Warner’s position as captain of Sunrisers Hyderabad is understood to be under review, while Smith lost the same role with Rajasthan on Monday when the franchise named Ajinkya Rahane as his replacement.

This demotion was stated as being of Smith’s own volition but the words from the team owners that accompanied it – and the fact the franchise is looking to rebuild its own image after a two-year suspension for the spot fixing – points towards this being a case of jumping before the push.

Rajasthan’s head of cricket, Zubin Bharucha, said, “The incident in Cape Town has certainly disturbed the cricket world. We have been in constant touch with the BCCI and taken their counsel. Furthermore we have been in regular contact with Steve.

“Steve believes given the current circumstances it’s in the best interest of the Rajasthan Royals that he steps down as captain so the team can get ready for the start of the IPL without the ongoing distractions.”

Smith and Bancroft have been warned that their actions will stain their reputations for some time by Trevor Chappell, the former Australia player who sent down the infamous underarm delivery against New Zealand in 1981 – an act that was legal at the time but invoked huge public opprobrium.

Chappell told Australia’s Daily Telegraph: “They will struggle for the rest of their lives and be known as the ones who brought Australian cricket into disrepute.

“I’m the last one who comes up on Google as the man who took the lead role in Australian cricket’s darkest day — it’s a real relief I can finally drop that title.”