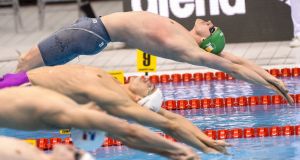 Shane Ryan in action during the 50m backstroke final at the LEN European Swimming Championships at the London Aquatics Centre. Photograph: Andrea Staccioli/Inpho

Fiona Doyle and Shane Ryan put in impressive performances on the second night of racing at the European Championships at the London Aquatic Centre as Doyle progressed from her semi-final and Ryan placed eighth in his final.

Olympic qualifier Doyle came home in one minute 7.99 seconds to finish fourth and secure her place in Wednesday’s 100m breaststroke final. The 24-year-old swam a fantastic race, having come in to the semi-final in 12th place, to guarantee a lane in the final.

After a nervous wait while the second semi-final took place a delighted Doyle commented: “I knew I had more in me after the heat swim, I just needed to shake off all the cobwebs and the worry and once I had the heat swim out of the way I knew exactly what I needed to do. The race again still wasn’t perfect but it was miles better than this morning and we know there’s more to improve on so I’m really looking forward to tomorrow.”

World record holder Ruta Meilutyte is the fastest qualifier for the final in 1:06.16.

In the 100m backstroke Ryan touched in eighth place in his first European final. Ryan swam a time of 54.49, just off his best time this year of 53.93 which would have placed him in the bronze medal position.

“I took it out too slow and didn’t nail the turn like I wanted to but I’ve just got to move on,” said Ryan after the race. He returns to the pool on Wednesday morning for the 50m backstroke “I’m really excited for the 50, I’ll definitely be making top 16”.

It’s a busy day for Irish swimmers in London on Wednesday. Brendan Hyland is first up in the 200m butterfly, his main event. Sycerika McMahon will swim the 200m individual medley while Rio bound Nicholas Quinn swims the 200m breaststroke with Dan Sweeney. Danielle Hill returns to the pool in the 100m backstroke with Ryan last up in the morning in the 50m backstroke. The 100m breaststroke final featuring Fiona Doyle takes place at 6.57pm.