Sarah Healy and Sophie O’Sullivan safely through in Sweden 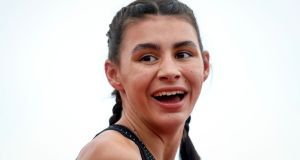 Nothing beats championship experience, even at age 18, and Sarah Healy displayed that in abundance when positively cruising through her 1,500 metres heat on the opening day of the European Under-20 Athletics Championships in Borås, Sweden.

Having won double gold over 1,500m/3,000m at the Under-18 championships last summer, Healy was under some pressure to qualify, her best of 4:09.25 also the fastest in her race. So she left nothing to chance and gently hit the front after 500m and with that controlling the race from there to the finish.

Oliwia Sarnecka from Poland did get past her on the line to take the win in 4:22.19, only by then Healy was easing up, the Blackrock AC athlete content to take second in 4:22.34, and save all her energy proper for Sunday’s final.

Taking third also looking comfortable was Delia Sclabas from Switzerland, in 4:22.51, who had earlier qualified out of her 800m heat, although it remains to be seen how her double attempt will impact on the longer distance. Either way Healy is through will plenty it seems in reserve, the first four sure of progressing.

Sophie O’Sullivan, daughter of Sonia and who also won silver last year at Under-18 level, earlier came through her 800m heat safely, nailing third spot in 2:06.96, with Britain’s Keely Hodgkinson taking the win in 2:06.19 - with O’Sullivan ending up ranked fourth fastest across the four heats going into Friday’s semi-finals. Jo Keane also qualified from her heat in 2:09.28, also taking third sport and guaranteeing her place in the semi-finals on Friday morning

Davacia Patterson also came through her 400m heat in super impressive style, taking the win in 53.88 and ending up third fastest of the lot going into the semi-finals - and looking well capable of making the final.

So near and yet so far for sprinter Patience Jumbo Gula, who came through her heat in 11.75, only to miss out on a spot in the final by one place, clocking a season best of 11.69 in her semi-final - 11.68 going through.

Also well positioned for a medal in heptathlon is Kate O’Connor from Dundalk St Gerard’s AC, who in the shot put threw her best of 13.41 in the first round, and was leading after three events on 2640 points, with every chance of securing a podium place on Friday, a possible first in any multi-event discipline since Barry Walsh won decathlon bronze back at this level in 1987.