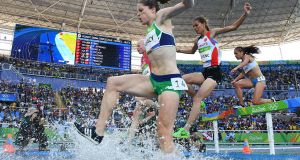 Ireland’s Sara Louise Treacy during the 3000m steeplechase round one on Saturday. Photograph: Getty Images

It’s hard enough running a 3,000m race that includes 28 barriers, each two and a half feet high, plus seven water jumps, without having athletes getting in your way as well.

They certainly got in Sara Treacy’s way, only not, as it turned out, costing her a place in the Olympic final: despite originally finishing outside a qualifying spot, she’s now been added to Monday’s final, along with Etenesh Diro from Ethiopia and Aisha Praught from Jamaica, who were also taken out with just over two and a half laps remaining of their qualifying heat inside Olympic Stadium on Saturday.

The Meath athlete actually slipped off the side of the track completely, trying to swerve out of the way, after a couple of runners suddenly piled up in front of her, starting with Praught, as they raced down the backstretch, thankfully clear of any wooden barriers.

Praught appeared to be taken out without any warning, and in the process took out Diro, who actually stalled completely, when trying to pull her spike back on, and then Treacy, all three of whom lost considerable ground in the process, despite getting back running in a near instant.

Treacy had been running around ninth place, just off the back of the leading bunch, and eventually finished 12th place, 9:46.24, racing hard until the line.

Diro actually got up to finish seventh, brilliantly, but was also just outside an official qualifying spot, and with that immediately fell to the track in tears. Praught finished eighth, yet she too was later added to the final.

Treacy then passed through the mixed zone unaware track judges were actually reviewing the race video, on appeal of the team managements involved, including Ireland track and field manager Patsy McGonagle.

“This fall is not going to define my Olympics,” said Treacy, the 27 year-old qualified doctor, and again unaware of what was to come. “It’s all about getting up and get going again.”

Indeed Diro’s right spike was partly torn off in the tangle, and while she initially struggled at first to replace it, with the race leaving her behind, ultimately decided to discard it, stopping first to remove the sock. She thus ran the last two laps taking off for the barrier jumps from her bare foot, and landing on the one spike she had left on.

Originally only the top three of each of the three heats, plus the six fastest losers, were to go through - making for a 15-woman final; however, there will now be 18 in the final, which is set for the Monday morning session back inside the Olympic Stadium (3.15pm Irish time).

No such joy for Kerry O’Flaherty, who came comes home in 14th place in her heat with a time of 9:45.35, a season best, won impressively by Ruth Jebet in 9:12.62, the former Kenyan, reportedly still only 20, now running for Bahrain. Michelle Finn finished fast in her heat to chase down three places in the homestretch, finishing in 11th with a time of 9:49.45.