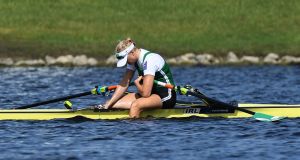 Sanita Puspure is a two-time Olympian and has medals from the European Championships and World Cup regattas.

And then came the wind. The ill wind. Puspure has been training in Ireland for a decade, but learned her rowing in Latvia and has not always been at her best in choppy waters.

“I didn’t get a good rhythm through the race,” the Old Collegians oarswoman said. She had not got the edge she might have had at the finish because, she said: “I had expended so much energy in the middle stages”.

Puspure said that after having such success with the tactics in the first three races in Florida in a cross headwind - second, first, second - it was difficult to switch over to managing a race where there was a roaring tailwind.

And yet she came so close to taking that medal, closing from 2.67 seconds down on Lobnig at 1500 metres to just 0.35 at the end. It was so tight a margin that Puspure wasn’t even sure if she had she taken bronze.

Lobnig, too, was unsure. “It was hard to see where I was in that last bit. I saw Sanita coming from behind me so I was very glad I could hold her off at the end,” she explained.

Could Puspure have medalled if she had moved earlier?

“These are the questions we always ask ourselves. The ‘what ifs’. But there is no point dwelling on these things.”

The race lanes had been redrawn because of the wind, but while Lobnig was disadvantaged by this she thrives in these conditions - the Austrian, who took gold at the European Championships in 2016 in dreadful conditions, overcame a bad wobble in the middle stages.

Puspure has come through a season in which her racing and training programme was disrupted by illness and two visits back to her native country for family bereavements. She was not downhearted. “If you had offered me fourth in the world at the beginning of the season I would have taken it.”

The final medal table told of a great World Championships for Ireland with the golds for the lightweight men’s pair and Paul O’Donovan in the lightweight single placed us joint sixth.

On Saturday, Aifric Keogh and Aileen Crowley finished second in their B Final of the women’s pair. This placed them eighth in the world, competing in only their second regatta together.

Northern Irish rowers, who had previously rowed for Ireland at underage level but now compete for Britain, also had their fair share of success.