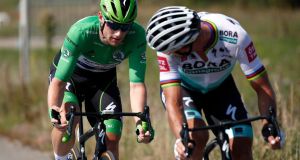 Peter Sagen turns round to check on Ireland’s Sam Bennett during Stage 15 of the Tour de France. Photograph: Sebastien Nogier/EPA

They say one of the best views in all of France is from the top of the Grand Colombier, the near mile-high pyramid on the southern edge of the Jura Mountains, looking out to Mont Blanc, the Alps and across the Rhône valley. At Sunday’s Stage 15 finish it also provided a pretty clear picture of this year’s Tour de France - in green, white and yellow.

After the suitably yellow-coloured train that is Team Jumbo-Visma rode their yellow jersey safely to the top, leaving just a dozen riders in contention, Primoz Roglic was again denied a second stage win in this year’s Tour by his young Slovenian understudy Tadej Pogacar, who in a near action replay of last Sunday’s Stage finish in the Pyrenees burst past in the closing metres.

At age 21, now virtually certain of wearing the white jersey as the best young rider all the way to Paris, it may only be a matter of time before Pogacar wears the yellow jersey in a future Tour; for this year, though still just 40 seconds ahead of the UAE-Team Emirates rider, the 30-year-old Rogloc still looks to have ample strength to stay in yellow.

After losing a fascinating battle for points on Saturday, conceding 23 to Peter Sagan, Sam Bennett is still very much winning the war for the green jersey, stealing two points back from Sagan at Sunday’s intermediate sprint at 58km, which came before the three climbs on the 175.4km from Lyon, and he’s now 45 points ahead, 269 to 224.

With the time limit of 16 per cent on the stage, from there the main concern for Bennett was finishing within 43 minutes and 52 seconds, which he comfortably did, aided again by his Deceuninck-Quick Step team mates, finishing 153rd on the day, 38:57 behind.

Bennett took his time for good reason: known as the pyramid given its four clear sides, the stage finish partially skirted three sides of the Colombier on the 17.4km ride to the actual summit, some of the final ramps of 22 per cent uphill gradient, the biggest loser unquestionably being defending champion Egan Bernal, dropped with still 12.9km to ride, eventually finishing seven minutes and 20 seconds down.

That also dropped the Team Ineos-Grenadiers rider out of the top-10 and contention, now in 13th place, 8:25 behind, while Britain’s Adam Yates enjoyed another good day in and out of the saddle, finishing eighth on the stage and moving up to fifth overall, with Rigoberto Uran of EF Pro Cycling, ninth of the day, now third overall, 1:34 in arrears.

Another of the Colombians Nairo Quintana also lost 3:50 on the final climb, and dropped four places to ninth overall - the twisting Colombier, absent of crowds because of Covid-19 restrictions in the province, not quite suiting the Colombians as much as some thought.

Before last Sunday’s Stage 9 finish in the southwest Pyrenees, no rider from Slovenia, the semi-Balkan nation of just over two million people, had ever won the leader’s yellow jersey, and it’s hard to see Roglic surrendering after Monday’s second rest day, before the six stages that remain. It happened to be here that Roglic already informed the world of his superiority over Bernal when he resumed racing at the Tour de l’Ain last month, winning the stage while Bernal similarly faded.

Dan Martin, after his excellent 11th place effort on Friday, had another good ride and finished the stage in 21st, 5:14 down, and now sits in 27th overall, with the promise still of a few stage challenges in the Alps. Nicolas Roche finished the day in 86th place, 33:51 behind, and now sits 72nd overall.

After Monday’s rest day there are three big Alpine mountain stages in succession, and Friday’s rolling Stage 19 finish at Champagnole may well throw up some significant green points, before the grand finale on Champs-Élysées next Sunday.

Saturday’s Stage 14 proved a proper rollercoaster of a ride before the finish in Lyon, Soren Kragh Andersen from Denmark riding off the front of the lead group with just over 2km to go take his first Tour stage win, Bennett long since distanced back in the second group. Sagan took fourth, clawing just 18 points back on Bennett, having earlier gained another five points back at the intermediate sprint - making it 23 points for the day.

Bennett admitted part the challenge between here and Paris will be timing his effort against Sagan: “We’ll look at it again, on the rest day,” he said. “It’s also about calculating the effort on the road. Yesterday (Saturday) they (Bora-Hansgrohe) were making a big, big effort, so I let them go, because I wanted to save the legs for the longer climb that was coming after.

“In the end I didn’t get over the longer climb, but I almost did, so it was about being smart, and using the energy wisely. That’s what every Grand Tour is about. Preserving energy when you can, and using it when you have to. Once the climbs come, it was about surviving. I definitely wouldn’t be in this position without my team mates, they’re doing a fantastic job, and I can’t thank them enough.”

“So it’s looking better, but still a long way to go. Paris definitely feels that bit closer, just five road stages, and one time trial. So it doesn’t seem that far, but a lot can happen in those days too.”

Asked if Sagan or the Alps would provide the biggest challenge between here and Paris, Bennett said: “Ah, the mountains, because I have to finish them first. I think yesterday (Saturday) was a good day, a turnaround from the day before, I felt very strong. The day before (Friday) was hell. I think on Saturday we limited our losses, the legs are good, and the morale is good. I’m enjoying the battle, and having a lot of fun. We’re taking each day as it comes, and often you just do the best you can, but at the moment everything is looking good, but a lot can change in the next few days.”

Indeed for now at least the Tour is looking pretty perfect in green, white and yellow.