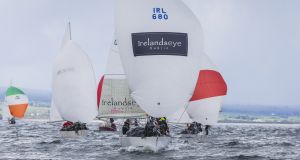 A solution to the widespread problem of youth involvement drop-off in sport is bearing fruit after five years of operation at Howth Yacht Club.

An absence of young sailors of school-leaving and college age had been noticeable so, spearheaded by Noel Davidson and Fergus O’Kelly, the plan was to enter a youth team in the BMW J24 European Championships at the club in 2013.

While aimed squarely at amateur and club-based sailing, the programme has adopted training techniques that would be familiar to professional and Olympic-level campaigns.

Recent results are proof that the format works.

From the outset, Enda O’Coineen lent his J24 Kilcullen to the programme and the first recruits including Cillian Dickson, who grew up Mirror sailing on Lough Ree, along with Clontarf Yacht & Boat Club’s Gordon Stirling formed the nucleus of the team.

J24 skipper Brian McDowell agreed to act as mentor to the group to help with developing a strategy to bridge financial and logistical hurdles.

The leaders are now responsible for planning their campaign in full, including presenting plans to the HYC Sailing committee, budgets and fundraising. Fitness and diet regimes are also in place.

According to McDowell, the crew decided their own savings campaign, chipping in €20 each a week while support also came from David Cullen of Euro Car Parks, who helped with new sails. Other club members have since lent boats to the programme.

The scheme now has 20 participants under-25 with the original sailors facing their final season in the scheme.

From the initial squad of five, three boats are now sailing, including Diane Kissane and her crew using the scheme to train for the International Women’s Match-Racing series.

As the first team evolved, from a base of knowing nothing about racing keelboats, their results started to improve. In 2015, they won the J24 national title and the ICRA Class 4 championship as well as placing in the top three finalists at the ISA Helmsman championships.

Recently, the senior team won the J24 Northern championships at Sligo YC with a race to spare and they will shortly be defending their ICRA title on home waters.

Currently, the team are in Poole in Dorset, a major J24 centre, while Kissane and her crew are preparing for next year’s Women’s Match-Racing World Championships.

“Next steps will be to grow the programme further by adding boats and also exporting the concept to other clubs,” McDowell said. “