Round-up of sports books of the year 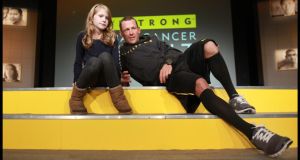 Lance Armstrong during rehearsals for the opening of the Livestrong Global Cancer Summit at the RDS Dublin.

It was back in 2000 that Lance Armstrong won the prestigious William Hill Book of the Year award for his autobiography It’s Not About The Bike, the tome covering his life up until his 1999 Tour de France ‘win’ and, naturally, featuring passionate and affronted denials that he had doped his way to success.

The book has, of course, since been re-categorised as ‘fiction’, as five Americans who purchased it argued it should be in a lawsuit, the judge throwing out their bid for compensation in September, siding with the publishers who argued that the First Amendment gives Armstrong the right to lie.

The right to tell the truth about Armstrong – or least ask a question or two – was, of course, a trickier affair through the years when sport’s greatest fraud was being largely lionized, a small group of journalists fighting the good fight. And one of them, David Walsh, was, ironically enough, shortlisted in 2013 for the very same William Hill award earlier scooped by It’s Not About The Bike.

Seven Deadly Sins: My Pursuit of Lance Armstrong, winner of the Irish sports book of the year award, was actually published in December of last year, but few books gained quite the same attention through 2013, to the point where it is currently being made in to a film directed by Stephen Frears.

And doping was the theme too of the book that won the 2013 William Hill prize, although this time of the equine kind. Doped, the Real Life Story of the 1960s Racehorse Doping Gang, by Jamie Reid recounts one of the more unseemly stories in British horseracing history, when bookie Bill Roper –- appropriately enough nicknamed ‘Roper the Doper’ – and his associates schemed to fix races, ‘nobbling’ horses along their way to earning a small fortune. The tale has a “you couldn’t make it up” quality to it all, its background, as the William Hill people put it, “generously scattered with sex and drugs and royalty”. Even the greatest of thriller writers would struggle to outdo it.

Among the other books Reid beat to the prize was Daniel James Brown’s The Boys In the Boat: An Epic True-Life Journey to the Heart of Hitler’s Berlin, which tells the extraordinary story of American rower Joe Rantz who left 1930s America for Germany in an attempt to rebuild a broken life, going on to compete in the 1936 Olympic Games.

Darker side
Also hailed in 2013, and another book that examined sport’s darker side, was Ed Hawkins’ Bookie Gambler Fixer Spy: A Journey to the Heart of Cricket’s Underworld, the 2013 Wisden Cricket Book of the Year that investigated match-fixing and produced an eye-popping revelation or two.

Mike Tyson, of course, hasn’t exactly been a stranger to scandal and controversy either, so his autobiography Undisputed Truth was widely enough anticipated, just to see his version of the ‘truth’.

A rape conviction, alcoholism, drug addiction, court cases, money woes, it’s been an eventful life, and that’s not even touching on his boxing career. Love him or loathe him, though, it’s a story like few others, and much the same can be said about that of Mo Farah, although it would be accurate to say they are somewhat different personalities.

And Farah’s Twin Ambitions has been well received, a moving and revealing account of his life journey, from Somalia to Britain to the status of one of the greatest athletes of all time. It’s his personal story, even more than that of his rise to sporting success, that is most absorbing, not least the impact on him of his separation from his twin brother when his family moved to Britain.

The Sports Gene
Farah could well be the chief subject of The Sports Gene: What Makes The Perfect Athlete by Sports Illustrated writer David Epstein, another book to make the William Hill shortlist, a study of the ‘nature v nurture’ debate: are athletes just born brilliant, or can practice make perfect? No spoilers, but you can probably guess the conclusion.

An annual must-buy for fans of the finest sports journalism is the The Best American Sports Writing anthology, the 2013 version, edited by the Pulitzer Prize-winning journalist JR Moehringer, featuring 26 articles covering an array of sports, although quite why bullfighting is included is a mystery. Next thing they’ll have hare-coursing.

On the golfing front, Bobby’s Open: Mr Jones and the Golf Shot that Defined a Legend by Steven Reid collected a few gongs in 2013, including the London Times sports book of the year, the paper’s former Golf Correspondent John Hopkins hailing the account of the career of a man he described as the Richard Wagner of the sport, “Reid’s trick is to have unearthed some new information which he has leavened with material that was known and presented it all in a thoughtful and thought provoking way”. So, if golf is your passion, put it on your shopping list.

Back on the home front, Gerry Duffy’s Tick, Tock, Ten was an Irish sports book of the year nominee, an account of his participation in the gruelling – and that’s putting it way too lightly – Deca Iron Distance Triathlon when only three of the 20 competitors completed the challenge – the winner, Gerry Duffy.

It amounted to swimming 24 miles, cycling 1,160 miles and running 10 full marathons in 10 consecutive days, so if you’re reading his book on Christmas Day while slumped on the couch after your 46-course meal, be ashamed.

1 Sonia O’Sullivan: Taming The Tan gave us one last roll of the dice before shutdown
2 Son Heung-min to carry out mandatory national service in South Korea
3 Avoid the treadmill at all costs – marathon training in the 2km radius
4 Rich Premier League clubs way off the mark in cutting staff pay
5 Reality Bites – Tales from the new normal: Shane O’Donnell
Real news has value SUBSCRIBE