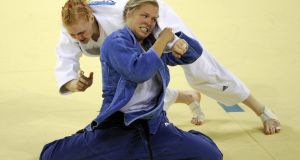 Ronda Rousey of the US (in blue) won bronze in women’s 70kg judo at the 2008 Beijing Olympics and subsequently had to live in her car as she could not afford to play rent. Photograph: Olivier Morin/Getty Images.

More than 11,000 athletes marched into Rio de Janeiro’s Maracanã Stadium on Friday night, officially kicking off the 2016 Olympic Games. Only a handful of them, however, will return home to their countries with medals.

Even fewer will find monetary rewards for the tremendous investment many have had to make to reach the Rio games.

Of course, a tiny handful with particularly compelling stories – assuming they bring home gold – will sign lucrative deals with sponsors. Michael Phelps, the most decorated summer Olympian in history and a swimmer tipped to win more medals in Rio, already has an estimated net worth in excess of $50 million.

Simone Biles, the gymnast whose feats have made even veteran coaches gasp in awe, has had sponsors compete for her endorsement, and agreed to put her star power behind Nike, Special K, laundry detergent and a gymnastics equipment supplier (it’s making mats with her signature on them). It’s safe to say that Biles, too, is on her way to multimillionaire status, if she manages her money well.

Like most 20-year-old athletes, they’ve devoted every waking hour and thought to perfecting their performance, and money considerations often go only to necessities plus coaching, equipment and competitions.

Visa, the credit card company, has launched a global financial education program at the Rio Olympics aimed at helping competitors take control of their financial futures.

Designed in partnership with the International Olympic Committee (IOC), it’s a basic financial education package: an introduction to budgets, saving, money management and bank services. The organizations plan to introduce the program at the Olympic Village with training sessions in the fall.

Such programs are sorely needed. Only athletes who compete in high-profile sports stand a chance at earning significant sponsorship revenue, and even then, an injury or poor performance can dramatically affect pay.

If your sport is something that only appears every few years at the Olympics – say, short-track speed skating, or kayaking – or you finish fourth, a few fractions of a second out of the medals, it’s reflected in your paycheck.

Many Olympians know what that is like: unlike the top female gymnasts, who attract thousands of fans – and attendant sponsors – many top athletes live close to the poverty line. Want to compete in fencing? Congratulations: be prepared to fork out north of $20,000 a year. You’re a budding equestrienne? There are plenty of reasons – a stable, a horse, a trainer – why royalty (Princess Anne of the UK) and billionaires’ children (Michael Bloomberg’s daughter) compete at an elite level.

More than 100 US athletes started GoFundMe pages in the run-up to the Rio games, seeking funds for new equipment and to help them cover their basic living expenses while they tried to concentrate on training. Some have even applied for food stamps.

Many countries promise medal winners cash prizes. This year India will dole out what could be the life-changing sum of 10 million rupees, or about $160,000, to every gold medal winner, $120,000 to each silver medalist, and $80,000 for a bronze. Athletes who work for India’s railway system will get extra cash – and promotions. China has handed out cash, luxury cars and even new houses. The US will be much less generous: the US Olympic Committee will pay $25,000 for a gold, $15,000 for a silver, and $10,000 for a bronze – and medal winners should expect to lose as much as 39 per cent of that in taxes.

But even medalists do end up broke. Ronda Rousey collected bronze for her prowess in judo in Beijing in 2008 – but a few months later was living out of her Honda Accord, unable to afford rent. She became a bantamweight champion for the Ultimate Fighting Championship (UFC), a mixed martial arts league – and later sold the car on eBay for $21,300.

More tragic is the steep fall from success of another Olympic medalist, Debi Thomas. Featured on Time magazine’s cover in 1986, she became the first African American to win a figure skating medal, capturing bronze at the Calgary Olympics of 1988.

She graduated from Stanford and earned a medical degree from Northwestern, and became an orthopedic surgeon. Today, that medical license has expired. Thomas has filed for bankruptcy, and lives in a mobile home with her fiance. She isn’t even sure where to find her skates or her medals.

Clearly, there’s more at work in Thomas’s case than being ill-prepared to deal with the financial realities of “normal” after the Olympics.

But athletes and families still dealing with the legacy of all those costs – but without the lavish endorsement deals – might find it worth their while to quietly spend a few minutes checking out whatever financial planning tools a company offers.

That’s a harsh reality that is beyond the control of any Olympian – and probably not anything that they should brood over as they prepare to deliver the performance of a lifetime. But win or lose, the athletes face a new challenge: managing their money. Guardian Service