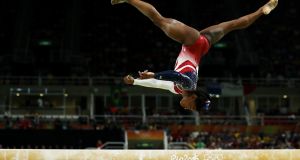 Simone Biles is threatening to loom over every other star at these Olympics although she stands at 4’ 8” in pumps, not including pony-tail.

On a bright Tuesday afternoon in Rio, the elite countries of world women’s gymnastics, face painted and glittering and years away from being able to legally vote or buy a drink, defied gravity and bone-breaking injuries in the ever-tense battle for gold in the team event. And as everyone expected, it was the tiniest of America’s athletes who cast the longest shadow.

Gymnastics is a locked-in world. Outside in the main park, the crowds drift around the venues and concession stands under 25 degrees, taking a billion-selfies but inside the echoing chamber of the gymnastics auditorium, the clock and mood is always set to 1976 and Montreal.

The crowd had hardly taken its place in the stadium when the announcers invoked the name of Nadia Comaneci, the Romanian gymnast whose spellbinding routine transformed the profile and possibility of the sport and her score – the Perfect Ten – became one of the enduring moments of the entire decade. “It changed everyone’s life,” the announcer blithely assured us. “Suddenly the impossible was now possible.”

The score is literally mythical now as the International Federation of Gymnastics abolished the system a decade ago, in favour of a busier, less romantic points system which was designed to encourage more adventurous routines.

Although this is her maiden Olympics, Biles has already accomplished more than the Romanian – three times world champion, and 10 gold medals in a haul of 14 world championship medals. Adding to that tally won’t be a problem here in Rio. The more oblique challenge is to somehow back flip and tumble her way into the more ethereal dimensions of these Olympics: to create a moment which will last. It’s a feat that is becoming increasingly difficult in a world that has many more distractions that it did 40 years ago.

If anything, Biles’s first Olympic medal was a vivid advertisement of just how different women’s gymnastics has become in the four decades since Comaneci charmed the watching world. Yes, the women’s teams still look like pixies – particularly in these seats, where they were handing out optional oxygen masks as we climbed the final steps. But whereas gymnastics of the old East had an unmistakable balletic quality about it, the sight of Biles charging towards the vault or bulleting through the air or turning breakneck full twists and double backs is a confrontational expression of overwhelming athleticism.

She is less than five foot of compact muscle and power and whatever synapses are required to enable human beings to perform mind-churning twists and back flips and land feet first, not only without killing themselves but without offending the sensibilities of judges, who sit and assess these mind-boggling demonstrations with the demeanour of economics students attending a particularly dense lecture.

Even in the team event, the force of Biles’s personality and aura seemed to diminish the belief of the opposing teams. Whatever apparatus she was using became the immediate focus of attention and even her opening turn, on the vault was a blurry personification of the old Olympic ideals – travelling frighteningly high and unbelievably fast through the air. Her score – 15.933 – seemed to crush any collective hope of a surprise and the Chinese and Russian coaches wore stonily resigned expressions for most of the afternoon. There are certain Olympic sports which seem like a subliminal battle to decide which way of life is best and gymnastics is one of those.

By the time the final reached its fourth and final rotation , the Americans were a full five points clear of the Chinese – 138 to 133 in combined points – and a misfortunate slip on the floor routine by Mao Yi deepened that deficit. It meant that the four Americans could go through their floor exercise in pre-celebration mode.

Hard to imagine the number of hours and therefore years, that Maria Paseka and the others have devoted to getting to this day only to see it turn into an American procession. After Alexandra Raisman’s forceful display of air-tumbling, the Russian team had retreated into hugs and tears.

Inevitably, the final floor routine of the evening fell to Biles and for ninety seconds she owned the auditorium. Her final individual score – 15.800 – elevated the United States technically from last place to first. Biles rushed to receive the adulation of her team-mates, of America.

Then, out of the blue, Nadia Comaneci herself appeared in front of the in-house camera some on the 40th anniversary of her Montreal moment to say cheerful things to the crowd and to wave to the cameras. Past and future brushed against one another. A similar Olympic ceremonial gesture may well be in Simone Biles’s distant future as she seeks to add further gold medals to this dazzling and expected first.

Andrew Porter fronting up to responsibility of starting Ireland role 06:00
Jackie Tyrrell: Winter is here and a machine-gun Championship awaits 06:00
Fresh faces and renewed appetite: Is this a new era for Irish rugby? 06:00
Chris Crummey thankful for the chance to embrace championship action 06:00
Colin Byrne: Hard to understand how golf has become the bogey man now 06:00
Here is your handy guide to sport on television this week