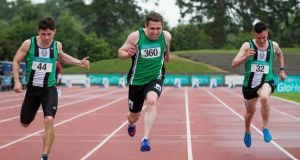 World number one Jason Smyth is going for a third-straight paralympics gold medal in the 100-metres. Photograph:

In her first Paralympics, the Castleknock teenager, who turns 18 during the Paralympics, begins the first of three events and has the honour of being Ireland’s first representative in action at the Games. Her personal best in the 40 metres freestyle is 5.35.49, set this year. Her world ranking is 17, her European six. The standout swimmers are Australia’s Lakeisha Patterson, Stephanie Millward (GB) and Jessica Long from the USA. A new personal best would be a great effort.

Born in Lithuania, Greta, one of triplets came to Ireland five years ago and finally realised her dream when claiming an Irish passport this year that allowed the student to fulfil an ambition of competing in the Paralympics. She represented Ireland for the first time in the Europeans where she won a bronze. Her PB is 4.48.85, enough for a world ranking of fourth. The absence of the Russians won’t hurt and if she runs close to her best, the girl with Stargardt’s disease (some vision in her left eye) could medal.

In his second Paralympics, this represents his strongest event. He is the only male, blessed amongst women in the swimming team. His personal best is 2.53.03, his seasonal high point, 2.54.76, giving him a world ranking of seventh. Daniel Diaz from Brazil is the favourite. He goes in lane three of heat one and is fancied to make the final, which takes place at 23.59.

It is the first International Paralympic first event for the two of them, having come together from different tandem pairs earlier this year, their only event a World Cup race in Bilbao. A top eight finish would be is the challenge although the Kilkenny/Tipperary axis are talking about a medal opportunity if they can manage a time of 4.16 or thereabouts: GB, The Netherlands, Germany and Spain are the form outfits.

The Kildare native who lost a leg in a car accident while on duty with the Irish Defence Forces in Liberia (2003) is competing in his second Paralympics. His personal best is 612, which happens to be a season’s best too. National champion from 2012 to 2016 he is expected to make the final. France’s Richard Didier is the man to beat. from

An Ireland team take on world ranked number two side, Ukraine, in their opening match of as group that contains hosts, Brazil and a strong Great Britain side that have improved appreciably this season. The last time Ireland played the Ukraine they lost 7-0. Luke Evans captains an Ireland side that includes several players who play Leinster Senior League soccer. The players are have some degree of Cerebral Palsy. The IPC has removed 7-a-side football from the programme in Tokyo 2020.

The world number one is going for a third straight Paralympic gold medal in the 100-metres having done so in Beijing and London, on each occasion breaking the world record in the final. Twice an Paralympic 200-metre champion that category has been removed from the programme so this is his sole event. Brazilian Gustavo Araujo is ranked second in the world, Australian Chad Perris third but if Smyth runs close to his season’s best, 10.39, no one show prevent him from confirming his mantle as the Fastest Paralympian on the Planet. The final is on Friday.