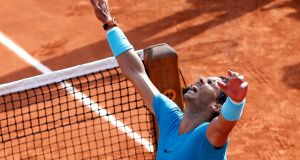 Sentiment rubbed up against reality here on Friday as two underdogs bowed to the inevitable to leave Rafael Nadal and Dominic Thiem standing when the red dust cleared on Court Philippe-Chatrier and relatively fresh to contest the final of the French Open on Sunday.

After grinding down the world No 72, Marco Cecchinato, 7-5, 7-6 (10), 6-1 in the first match and then watching Nadal reduce the former US Open champion Juan Martín del Potro to rubble in the second, the 24-year-old Austrian was reminded of the enormity of his task.

Only Novak Djokovic and Robin Soderling have got the better of Nadal at Roland Garros and, just turned 32 but back to full fitness, the Spaniard has been in occasionally imperious form here. Thiem has beaten him twice on clay in the past 13 months, most recently in Madrid last month and, if there is to be a shock to top Cecchinato’s defeat of Djokovic in the quarter-finals, he has a fighting chance.

Nadal took two and a quarter hours to win 6-4, 6-1, 6-2 against Del Potro. But the snap had clearly drained from Del Potro’s wrists – which have endured multiple surgeries – and the Argentinian’s last shot sailed clear of the baseline by a good foot. He looked woebegone and immensely relieved.

Nadal said: “If you lose, you lose. But I’m going to play with my highest passion, my love for the sport. I have a lot of injuries and I know the years are going quick. I love the competition, I love the sport. If it was not that way, I would not be here.

“It was a good second and third set for me. Sunday is the day to give my best, increase even a little bit more the level. In the first set, he was serving big. Every time I served, I was having problems. I gave him too many chances. If I don’t play well against Dominic, it’s almost impossible. He will be a big challenge. I believe I can have my chances.”

Thiem, the bustling Austrian regarded second only to Nadal on clay, must take the confidence of his successes against the world No 1 into the final to stop his opponent turning these championships into a personal benevolent fund. In winning 10 titles since 2005, Nadal has taken away nearly $17m in prize money, a fifth of his career earnings. That could grow by €2.2m on Sunday – or a not inconsiderable €1.12m for second place.

For Thiem, this is more than a numbers game, though. It is an assault on his self-belief, and he sounds mentally rock solid, even if his legs may be telling him a different story.

As he sees it: “I’m not the one who has the pressure. I went a very long way now and I don’t want to lose the final. Otherwise, it’s not a very nice feeling. He’s a big favourite against everybody. Still, I know how to play against him. I have a plan. If I want to beat him, I have to play the way I did in Rome [last year]and in Madrid. But I’m also aware that here it’s tougher. He likes the conditions more than in Madrid. Best of five is also different story.”

Beyond argument, Thiem had the tougher Friday. It was a curious affair, though – for reasons that had little to do with the match itself. It was impossible to tell if it was the weight of the moment or the loose-hanging threads of his past that most discomforted Cecchinato. For long stretches of the two hours and 17 minutes it took Thiem to eke out the victory, the first semi-final was loaded with unspoken darkness.

The odds on an exonerated match-fixer reaching the final of a grand slam might normally be a million to one. Yet, for nearly two hours, Cecchinato, the 25-year-old Italian, played his third heroic match of the tournament to push logic to its limit.

Two years ago he beat an 18-month suspension and a €40,000 fine for his part in a 2015 match-fixing scandal in Morocco on a technicality. On day 13 of the championships – his lucky number, as it happens – that dagger hung over tennis until Thiem cut him down in the afternoon sun.

The affable loser would not talk about it earlier in the tournament, and he was allowed the grace of not having to after a spirited fighting exit. Pity drowned moralism, for once. But his story has been as embarrassing for the game as it has for the player. Nobody saw any of this coming when Cecchinato’s name appeared in the draw. Nor did many alarm bells ring when he escaped from the first round in a tense five-setter against the unseeded Romanian Marius Copil. Then, with a boom that echoed around the game, he dumped Djokovic out of the tournament, and found himself staring out from centre stage.

Playing more freely after surviving two tough sets, Thiem raced to the finish. With the improbable quickly curdling into the impossible, Cecchinato’s happy head dropped and his legs dragged.

Perhaps it was the same sort of resignation that had consumed him the day in Morocco three years ago when he lost in straight sets to the world No 338, Kamil Majchrzak, at odds of 7-1, gratefully snapped up by a friend. Or maybe not.

Cecchinato does not want to talk about that. A lot of people do not. The Tennis Integrity Unit would only say in reply to the Guardian on Friday: “In line with TIU confidentiality policy, we are not making any comment on Cecchinato.”

Many in the crowd shouted “Marco! Marco!” as he departed, banging his right fist on his heart and soaking up more adulation than he can have had in all eight years as a pro. He leaves Paris headed for Eastbourne and Wimbledon €560,000 richer than when he arrived. And he did try his heart out. – Guardian service