Puspure sportswoman of the month 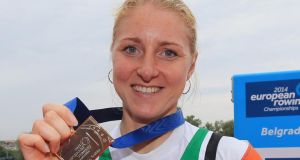 She took up rowing in her native Latvia when she was 15, and, in 2004 won gold at the World Student Games in France. Seventeen years on from when she discovered her sporting passion, Sanita Puspure, now a resident of Ballincollig with husband Kaspars and children Patrick and Daniela, ended Ireland’s eight-year wait for a medal in an Olympic event at a major rowing championships.

Puspure, who represented Ireland at the 2012 Olympic Games, where she finished 13th in the single sculls, took bronze in the same event at the European Championships in Serbia, having come back from a year blighted by illness.

Never out of the top three throughout the race, Puspure came close to taking silver behind Olympic Champion Mirka Knapkova, pipped to the runners-up spot by the Netherlands’ Chantal Achterberg by just two hundredths of a second.

Not since the men’s lightweight four took bronze at the World Championships at Dorney Lake in 2006 had Ireland medalled at this level.

Even before her June feat, Puspure had signalled her comeback with her form in the late May stages of the Championships in Belgrade, her determination to rediscover the level she reached to become Ireland’s sole rowing representative in London 2012 evident.

Achterberg had also beaten her in their heat, denying Puspure automatic qualification for the final, but she won her repechage and then came second in her semi-final.

Puspure began competing for Ireland in 2010, making her World Championships debut a year later after gaining Irish citizenship, becoming the first female single sculler to make it to the Olympics in 32 years, following up the achievement of Frances Cryan.

And with a European Championship medal to her name, all eyes are on Rio.