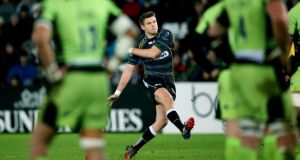 Ospreys’ Dan Biggar is set to win the Rhino Golden Boot for most points in the Pro 12. His 93.3 per cent record from the tee is the best seasonal record ever for a regular kicker in a major league. Photograph: James Crombie/Inpho

Dissuaded from staggered kick-offs and having the potential for a final day laced with the possibilities that freighted last weekend’s Six Nations conclusion in Twickenham, the Pro12 has confirmed that all of the final round of matches on Saturday May 16th will kick off at the same time.

Munster and Connacht finish their schedule before the playoffs with home games against Dragons and Ospreys, while Leinster face a trip to Edinburgh.

Ulster have the most difficult task of all and have to travel to Scotstoun Stadium to play Glasgow. With Glasgow sitting top of the league and Ulster in second place, the season’s final match, with the possibility of playoff places or home semi-finals on the table, is set to be a memorable meeting.

The last time the Warriors faced Ulster at Scotstoun, Glasgow triumphed 27-9 with Sean Maitland, Tommy Seymour and Mark Bennett touching down. This season Ulster came out on top at the Kingspan Stadium in October.

Elsewhere, Ospreys’ Dan Biggar is poised to beat Johnny Sexton’s Pro12 kicking record. The Rhino Golden Boot has in recent seasons been won by both Sexton and Ian Madigan at Leinster and JJ Hanrahan of Munster.

After the presentation of a replica Six Nations trophy to Paul O’Connell at Murrayfield, the IRFU received the real thing on Wednesday.